A flag girl at a drag race was in critical condition after she was run over in a St. Louis car accident recently, the St. Louis Post-Dispatch reports. 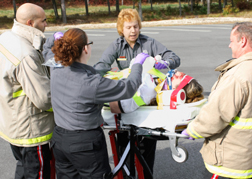 The teenage girl reportedly signaled the start of an illegal street race and was hit by a car and run over by a truck as the two vehicles sped forward, according to police. Both vehicles fled the scene, police said.

A spokesman for the police said authorities arrested a 19-year-old man and were seeking charges against him, but his identity was not immediately made available. Police said they have not found the driver of the second vehicle.

The car that hit the teenager was described as a gray Mitsubishi Eclipse that was missing a rear bumper and had a male driver and a female passenger. The truck was reportedly described as a black Chevrolet with Illinois license plates and two men in the vehicle.

Amanda Jett, who told the news source she was among the witnesses watching the race, said the girl was hit by the car's rear fender, which pushed her underneath the truck.

In 2009, 53,830 people were injured in Missouri car crashes, according to the Missouri State Highway Patrol's Statistical Analysis Center.

If you or a loved one have suffered losses in this case, please click the link below and your complaint will be sent to an accidents lawyer who may evaluate your St. Louis Car Accident claim at no cost or obligation.
Request Legal Help Now