SSRI May Have Caused Reflux Disease

SSRIs can cause many serious problems for infants and children. Many people associate the use of SSRIs while pregnant with birth defects such as primary pulmonary hypertension and other lung and heart problems. However, Theresa H. (not her real name) says that she thinks taking Paxil and Zoloft may have caused her child to develop gastro-esophageal reflux.

Theresa took Paxil for a couple of years before she became pregnant. After becoming pregnant, her doctor switched her to Zoloft, presumably because it was safer than other antidepressants for the pregnancy.

"My son was born a few weeks early—at 37 weeks—and came around a little slow, like a premature baby would," Theresa says. "He cried constantly from the beginning. We could never get him to stop crying so we took him to the doctor, but no one knew what was wrong. He was also projectile vomiting. I would feed him four ounces and it would look like he threw up eight ounces. 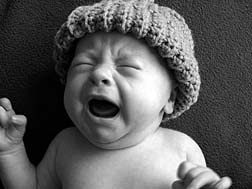 "The throwing up began right away and it got worse. At the beginning they said he was just getting out all the secretions that normal newborns do, but he kept losing weight and getting sicker. I couldn't take him anywhere because he would drown himself and me in throw up. His neck would get raw from where he threw up. The doctors determined he had reflux. He has been given medicine for reflux since he was four or five weeks of age. He is eight years old now and he still has problems with reflux. I read that mothers who take Zoloft or Paxil—their children can wind up with similar problems.

"When he was a baby, we gave him cereal and weighted down stuff and he would throw it up. He had to sleep with me because I was always worried he would throw up in his sleep and choke on it. He actually will throw up in the middle of the night and he won't know he's done it. The medicine keeps it under control for a while, but it occurs every few weeks or so. There are some foods that make it worse that he has to avoid.

More News
"Initially, doctors said he would probably grow out of it but he has not yet. I did all the standard things they told me to do to make it better, like keeping him upright and elevating the head of his bed but nothing has worked at all. He lost weight—at one point he was a chubby baby but that was the only time he was ever chubby. I felt like I had to feed him all the time because he wasn't keeping anything down, but I was told I was overfeeding him. Everything I did to help they said was making it worse. They even said that the throwing up was because I breastfed him and switched him to the bottle. But he threw up the whole time I was breastfeeding as well. Everyone has an opinion about why he couldn't keep food down.

"Now I watch what he eats. I worry about damage to his esophagus from him throwing up so much. I need to have something done to check that out but I'm worried about what it will show."

If your child or someone you know has suffered birth defects from SSRIs, please contact a SSRI lawyer involved in a possible [SSRI lawsuit] to review your case at no cost or obligation.
Request Legal Help Now