Did SSRI Cause Child's Birth Defects?

Paxil and other selective serotonin reuptake inhibitors (SSRIs) have been in the news a lot recently because they have been linked to serious birth defects. However, women have taken these drugs for a long time and now many women who took the antidepressants years ago are wondering if the drugs may have caused their children's birth defects. 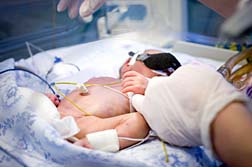 "Kelli M. is one such woman. She took Paxil in 1995 and quit after seven months, when she decided she wanted a baby. Kelli says that her becoming pregnant happened the same time that she quit taking Paxil, so it is possible that Paxil was still in her system when she became pregnant. Unfortunately, Kelli's daughter was born with multiple birth defects.

"I had lots of withdrawal symptoms from Paxil," Kelli says. "I was told I was pregnant and I started having trouble immediately. I took hormone tests and they [doctors] told me the baby wouldn't survive, that I would miscarry because my hormones weren't doing what they were supposed to do.

"However, I didn't miscarry the baby. Then, six months into the pregnancy I was measuring too much amniotic fluid. They did an ultrasound and found that the baby had a blockage in her intestines. I was put on bed rest and told she would come early. She came six weeks early and was born with the blockage in her intestines. She had a hole in her heart, but that healed up on its own while she was in the hospital. She had surgery five hours after she was born to correct bowel problem.

"She has another heart condition, Wolff-Parkinson-White (WPW), which is in her electrical pathways. She defibrillated on the table and it took 15 minutes to revive her. She came through the surgery but still has the pathway problem. She will have to have heart surgery when her heart is at full-grown size next year.

More SSRI BIRTH DEFECTS News
"She has little quirky things wrong with her and they have done genetic tests on her but they cannot find a genetic link causing these problems. She has a muscle missing in her mouth and her spine is a little crooked. She is not asymmetric—one ear is lower than the other, she has to be checked for scoliosis yearly and her eyes aren't completely level.

"I have another child who is nine years old. I didn't take Paxil again after quitting that first time, and my second daughter was born with no health problems other than allergies.

"I can't say for sure that Paxil caused these problems, but with all the other trouble that it has caused, I wonder sometimes. I emailed the makers of Paxil when my daughter was one year old and asked if her problems could be linked to Paxil, but I did not get a response from them.