Matilda Vasquez stayed on Paxil until she found out that she was pregnant with her first child, back in 2002. "As soon as I knew, I stopped taking my meds completely on my own accord," said Matilda.

"I didn't want to take any chances, especially because it was my first pregnancy." But at the end of her first trimester, her doctor told Matilda to get back on Paxil because of possible withdrawal symptoms.

"He reassured me it was safe to take while pregnant and my first baby, Isaiah, was born with no complications," she said. 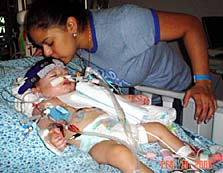 "Six months later, I was pregnant again and my doctor advised me to stay on Paxil. This time I took it throughout my entire pregnancy. Adrian was born one week early, on April 19th, 2004, with four major heart defects. Five days after he was born, Adrian underwent his first open-heart surgery and had a shunt placed into his heart. It was a temporary measure; at five months he had a seven-hour surgery and he was on a bypass machine for five hours. Between these two surgeries, Adrian was constantly in the hospital; even a minor sniffle would put him back in because his immune system was so weak.

In February 2005, he had emergency open-heart surgery. One of his valves was not closing properly so blood was backing up into the right side of his heart. There was no guarantee that he was going to make it as his heart was completely blown up almost to the size of his chest. In order to save his life, the surgeons had to cut through a nerve in his heart. This meant that the top and bottom parts of his heart were not communicating so in March he had a pacemaker installed. Adrian went through more infections; again my husband and I were told over and over that he might not make it through the night.

But he's a survivor! Adrian was discharged in April 2005. Since then he hasn't had any more surgery and the doctors predict that he won't need another for about three or four years. At that time, Adrian will need a conduit in his heart replaced and his bi-cuspid valve replaced. They will probably replace the pacemaker battery at the same time. He will need surgery for the rest of his life because batteries will need to be replaced and his conduit will also have to be replaced until he stops growing.

Sometimes for people like Adrian the last heart surgery will be in their 20s, for others, surgeries could go on until well into their 40s. At one time, during the emergency surgery, we were told he would need a heart transplant. I honestly don't know how I got through all this. People tell me that they can't imagine going through this but I do it because I have to. I can either be at home and cry and worry or be there for him, by his side at the hospital.

As if he hadn't gone through enough, during Adrian's second open-heart surgery he had blood transfusion poisoning. Poor little guy. The doctors say there is no medical explanation why he is still with us. Adrian is a miracle and I feel that he is here for a big purpose.

Paxil was always in the back of my head, wondering if it was the cause of Adrian's heart defects. There is no predisposition to any heart problems on either side of our family so it really got me thinking. Then I saw something on the news one day about a report that was going to be aired shortly about the possibility of Paxil causing heart defects. We never did see it on TV but right away my husband and I looked on the Internet and we found out that GlaxoSmithKline, the makers of Paxil, had sent out a 'Dear Doctor' letter to all health care professionals saying that Paxil could indeed cause heart defects in babies when the mother takes it during pregnancy, particularly in the first trimester.

More News
I was told all along that it was safe. I haven't talked to my primary care doctor since finding out. He probably didn't know either until this letter was circulated in December 2005. By then, Adrian was born. This angered me because I found out that GlaxoSmithKline knew the possible side effects since 1992.

I am still very angry. This is why I want to tell you about Adrian -- I want people to know of Paxil's dangerous side effects. Currently I am involved in a lawsuit and I am very confident that the law firm will represent me fairly. I want to say this to women and families -- I hope that this will never happen to you.

I never believed that it could happen to me -- never assume that everything will be okay if you continue to take this medication while pregnant. There are safer choices.

If you took an SSRI antidepressant medication during pregnancy and your baby suffered any type of birth defect, please contact an [SSRI Lawyer] who will evaluate your claim at no charge or obligation.
Request Legal Help Now