SSRI Birth Defects: This Experience will go on for a Lifetime

Sara was prescribed Symbyax, which contains the SSRI Prozac, in her third trimester of pregnancy because her psychiatrist was concerned that she would have issues of post-partum depression. Unfortunately, Sara's son was born with serious birth defects—birth defects that are very possibly SSRI-related. 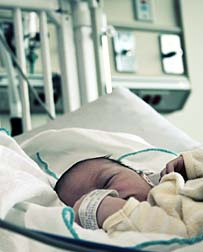 Just hours after Sara had given birth the doctors ordered a toxicology report on her son. He was having tremors, and they needed to know the cause. "The doctor was concerned that the tremors would affect his breathing or cause seizures," Sara said. "As soon as the paediatrician got the results of the toxicology report, she said there could be no other explanation than drug withdrawal. My son had nearly lethal levels of the Prozac in his blood. She also consulted with other paediatricians at a local children's hospital, and they agreed that it was the Prozac in my son's system that was the cause, and that it wasn't the first time they had seen something like this. He suffered tremors for the first 9 weeks of his life."

But things were about to go from bad to worse for Sara and her newborn son. "My son was also born without the flap at the bottom of his esophagus, and this caused severe acid reflux," Sara said. "He was hospitalized on several occasions because of dehydration related to the acid reflux. He went through a great deal of pain and suffering." In fact, Sara's son was hospitalized 5 or 6 times during the first 18 months of his life.

Unfortunately, the full effects of SSRI birth defects were still unfolding. "One night when I went into see my son while he was sleeping I saw that his lips were blue," Sara said. "This actually happened twice. So they ran tests for sleep apnea and eventually found excess fluid on his brain. I was told that he must be monitored 24 hours a day, 7 days a week, because the fluid on his brain could cause him to have seizures or stop breathing. As a single mother I had to take time off of work to care for him. I was fired because I was in a new job; I hadn't been there very long.

"The neurologist who saw my son weeks after the MRI said we will 'wait and see' if the fluid goes away on its own. They tracked him closely and he had another MRI at about a year. The doctors said the fluid levels were not high enough to be alarming. They continued their 'wait and see' approach.

"Then, at about two and a half years old, when things seemed to be normalizing, my son stopped using the toilet—and he had been potty trained successfully for months—and learning things more slowly than normal. So we took him to be tested for learning disabilities."

Every day is a reminder that this was preventable

"He is now almost 3 years old. His current paediatrician has ordered developmental assessments because he feels my son is behind in development. He has gone through an initial assessment and qualifies for additional evaluation. So far the evaluations show that he does have a learning disability.

More SSRI News
"When I was pregnant with my son I was just 20 years old. I didn't know what questions to ask my doctor. I was prescribed Symbyax to prevent any post-partum depression and it worked well when I had taken it in the past. But I will not take it now, even though it is effective. Taking any medication scares me now. This experience will go on for a lifetime, and for generations to come because my son's children will be affected by this as well.

"I have been going through various therapies from the time he was released from the hospital, about 3 weeks after his birth. Every day is a reminder that this was preventable, and the feeling is still there that it's my fault—it never goes away. Everyday my son comes home from school and he's frustrated because he can't learn or because he's having difficulties."

Sara has a message for other women who may be faced with making a decision about SSRIs during pregnancy. "I would say demand more answers. I was told there were no risks to my baby at the time the drug was prescribed for me. That has proved not to be the case."