SSRI Birth Defects – "I Had No Idea"

Christy was taking an antidepressant when she became pregnant, and, like hundreds of women, didn't think anything of it at the time. In fact, it was only recently when she started doing some research that she began to wonder if her daughter's heart condition could be an SSRI birth defect. 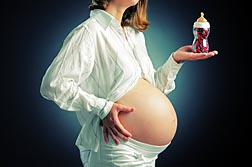 "My daughter was born about 5 weeks premature," Christy said. "She was in hospital for 4 weeks after her birth so the doctors could run tests on her, because her birth was so traumatic. They found that she has heart condition, and had underdeveloped lungs."
Her daughter also suffered from apnea, which is a dangerous condition where the muscles controlling the lungs don't move and the volume of the lungs remains the same. Prolonged apnea leads to a serious lack of oxygen in the blood, and in worst case scenarios can cause death. "I couldn't bring my daughter home for several weeks, until she was strong enough. She also had withdrawal symptoms from Lexapro the first 4 days or so when she was born."

Christy's daughter was born with bicuspid aortic valve, which means that her daughter's aorta had 2 valves, instead of the normal 3. The valves lead the blood away from the heart and to the aorta, so this is not an insignificant defect. "The doctors said that over time they will wear more rapidly than if there were 3 valves, and this might result in heart problems and the need for surgery," Christy said. "So over time, when she is an adult she will have to take good care of herself. I don't understand how this happened because there is no history of this type of thing in our family." If there were it might help explain why her daughter has this rare condition, which some estimates suggest affects between 1-2 percent of the population.

Not surprisingly, Christy had to take her daughter for regular check-ups to make sure her daughter was not in any further danger. "Now the doctors say she doesn't need to be checked until she is 5," Christy said. "But she still seems to have poor circulation."
Throughout her pregnancy, and while her infant daughter was in hospital immediately following her birth, no one mentioned anything to Christy about the possible birth defects associated with selective serotonin reuptake inhibitor (SSRI) antidepressants. Nor did anyone mention that the SSRI she had been taking may have been the cause of her daughter's withdrawal symptoms.

Christy's situation is not unusual. A study of 500,000 women, published in the Annals of Internal Medicine in 2007, found that 50 percent of women taking a prescription drug during pregnancy were not aware that those drugs could cause birth defects, because they had not been warned about getting pregnant while on the drugs. Notably, the investigators said that women being prescribed drugs like SSRIs should be counselled about the risks before they begin taking the drugs.

"I hadn't seen any information about SSRI birth defects, until her father told me he had seen something on television," Christy said. "He said he's seen something about the medicine I was taking that caused the kinds of problems my daughter had when she was born. So I started doing some research on the Internet, and the stories I read from other women made me think that maybe the Lexapro could have caused the heart problem, but I don't know."

The antidepressants known as SSRIs include Paxil marketed by GlaxoSmithKline, Prozac by Eli Lilly, Zoloft by Pfizer, and Celexa and Lexapro sold by Forest Laboratories, along with various generic versions of the drugs. The closely-related class of SNRI antidepressants also carry birth defects warnings and include Wyeth's Effexor and Lilly's Cymbalta.

In July, 2006, the Food and Drug Administration (FDA) ordered manufacturers of SSRIs and SNRIs to carry warnings on their labels about the risk for persistent pulmonary hypertension (PPHN). However, of all the SSRIs to come under fire, Paxil is possibly the most widely publicized.

More SSRI BIRTH DEFECT News
In 2005,the FDA issued a public health warning regarding Paxil. The warning was based on findings from 2 studies which showed an increased risk for birth defects in babies born to women taking the drug during pregnancy. In fact, the studies showed a 1 to 2 times greater risk of having a baby with a heart birth defect while on Paxil. In conjunction with the warning, the FDA placed Paxil in its second highest category of drugs known to cause birth defects.

As if any more proof was needed, a study published in the November 2008 issue of the British Journal of Clinical Pharmacology reported a 3 times greater risk for heart defects in babies born to mothers taking either Prozac (fluoxetine) or Paxil. The study looked at babies born to 800 women who said they took either drug during the first trimesters of their pregnancies. Comparison was then made to 1,400 expectant mothers who were not on antidepressants of any kind.

Unfortunately, Christy is not likely to ever find out if her daughter has SSRI-related birth defects. Had she known at the time of her pregnancy, that is to say had she been informed of the possible problems as the experts of the 2005 study recommended, Christy would have done things differently.