According to the Missouri Highway Patrol, an Arkansas woman who was flown to a nearby hospital after a Springfield car accident died recently, the Springfield News-Leader reports. 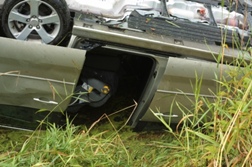 Brittany S. Fountain, 21, of Pineville, Arkansas, was originally taken to Cox South Hospital in Springfield after she reportedly sustained serious injuries in the crash, which took place on Missouri 14 at approximately 6:45 am, according to the news provider.

According to the highway patrol, Fountain died shortly before 10:00 am the following day.

Fountain was reportedly injured when she was heading eastbound in her 2005 Nissan Frontier, drove through a left curve and had the car overturn, according to the news source.

In 2009, there were 878 traffic fatalities in Missouri, according to the National Highway Traffic Safety Administration (NHTSA). That number was down 9 percent from 2008, when there were 960 fatalities.

Of the 878 fatalities in 2009, 85 involved either drivers or passengers between the ages of 21 and 24, and 80 occurred on either the freeway or the expressway, according to the NHTSA's Web site.

If you or a loved one have suffered losses in this case, please click the link below and your complaint will be sent to an accidents lawyer who may evaluate your Springfield Car Accident claim at no cost or obligation.
Request Legal Help Now

Posted by
Mark
on November 28, 2010
you know there wouldnt be alot of crashes if they learn how to fix the roads and more safer for us to drive on.... they take enuf [expletive] taxes out of us so fix the [expletive]roads.