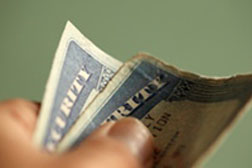 The scheme, which was carried out by Paul LoPapa, who reportedly has a history of fraudulent behavior, affected victims from around the country, including as far away as Arizona and Nevada, according to the news provider.

In addition to the investment fraud, it was alleged that LoPapa illegally received $145,000 in social security disability payments and falsely claimed that he had not been working since 1990, the news source said.

LoPapa faces up to 20 years in prison as well as fines of more than $250,000 in connection with the case. The news provider speculates that he will most likely receive less than that in accordance with US government sentencing guidelines.

If you or a loved one have suffered losses in this case, please click the link below and your complaint will be sent to an employment law lawyer who may evaluate your Social Security Disability claim at no cost or obligation.
Request Legal Help Now