How long is a reasonable wait for social security disability (SSD) benefits? A few months? A year? One man in Syracuse, New York waited more than 500 days—and he's not the only one. 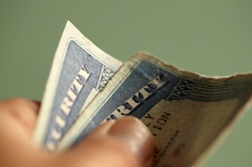 According to a 4/13/10 account in the Post Standard of Syracuse, part of the problem hinges on the fact that more than half of all claims for social security benefits—60 percent—require the intervention of a judge. Applicants stand a better chance of having their application approved at the judicial level, but only if they can wait that long.

The wait times are staggering. Social Security Administration says that the wait for approval for the Syracuse office until recently averaged 561 days, which is the 14th longest out of 143 hearing offices across the US. Columbus, Ohio takes the prize with the longest wait times in the nation—639 days.

According to the Post Standard, statistical evidence suggests that 64 out of every 100 SSI applicants will be turned away at the first step. Those applicants have to wait 120 days to appeal, and then they have to wait to appear before a judge. That doesn't even include waiting for the judge's decision after that appearance happens.

The Post Standard tells the story of Eugene Hunter, a Syracuse man who first applied for social security disability benefits in June 2008. He was denied a month later, but appealed the decision. During the long wait he ran out of funds and wound up on the street. Hunter spent three months in a shelter during the coldest months of the winter.

Things are looking up of late, now that he is in a subsidized apartment at the local YMCA and receives help through public assistance and food stamps. But it's not an easy life. Hunter hasn't been able to work since 2007, when he slipped two discs in his back. He also claims to suffer from diabetes and hepatitis C. His daily medicinal regimen includes an injection and 13 pills.

Although he is still waiting for a decision on his application, he is not waging his fight alone. Hunter found a law firm in Syracuse that specializes in disability and workers' compensation cases. Assuming a favorable decision, part of Hunter's settlement will go to the law firm that helped him with his case.

More SOCIAL SECURITY DISABILITY News
Experts say that given the backlog of cases in the system and the miles of red tape, few can get through it on their own without the help of legal counsel. The Post Standard reports that as of January there were 6,000 local cases clogging the system. While additional judges and support staff have been recently added in an attempt to clear the backlog, the average wait for a hearing is still substantial, averaging around 534 days in Syracuse.

One law firm interviewed for the story has a client who has been waiting five years to get approved. Another applicant, who was hospitalized with a brain injury that left him unable to work, lost his apartment and was unable to afford his medication. During the two-year wait for his application to be approved, the man was reduced to sleeping in bus stations.