For over 3 decades, attorney Charles Binder has been cutting a narrow but deep swathe through the legal system. He worked first as a public defender in New York City, and then later teamed up with his brother to advocate on behalf of disabled Americans struggling to claim Social Security benefits or disability claims. "It's simple," he says. "I think poor people deserve the same representation as rich people."

He rarely gets through the Long Island Railway or an airport without someone recognizing him from his TV commercials. "People say you're the guy in the hat. They don't know my name, but they know the hat," chuckles Binder. 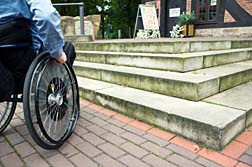 Don't let the hat distract you. Binder and Binder is the largest disability claims legal practice in the United States and Charles Binder is a serious lawyer. Every year he storms the gates of the Social Security Claims system on behalf of thousands and thousands of broken Americans.

In the beginning, when the Binder brothers started their Manhattan practice, many people did not realize social security included benefits for disabled workers and many still don't. "Government doesn't advertise it," says Charles Binder. "When they send you your annual statement about how much you have in your social security plan they don't tell you anything about the program or what it does or who it is for."

At one time, 90 percent of people who applied for disability benefits through the social security system were turned down. "The only people who would get disability were people who were terminally ill and that was about it," Binder says. However, after Binder and his brother Harry Binder started advertising their services and the right to appeal, the ratio flipped. By Binder's estimate, with proper representation only one in 10 is turned away.

Binder's favorite client, and a case in point, is an orphaned woman who was born with no ears. By the time she was 6, she had had a dozen surgeries to try to correct the problem. She still only had partial hearing. Her high-pitched voice and unusual appearance made her the object of taunts at school. "She was the girl without ears," says Binder. "She would run hysterically from the classroom. They made fun of her all her life and from the time she was 16-years-old she was afraid to go out."

As an adult, she applied for disability benefits but was rejected. "She was really defenseless and hopeless." says Binder. He argued her disability was emotional and arranged for a psychiatrist's report. Because she had never worked he won a stipend based on her late parents income, plus disabilities benefits and the right to access Medicare. It took five years, but Binder won.

That is why I became a lawyer," says Binder. "At the end of the day I know what I do has made a difference to other peoples lives," says Binder. "In my world I get hugs and kisses.

More Social Security News
The average social security benefit is about $700 a month. "If you have no income, that's a lot," says Binder. "Almost as important is the psychological relief for my clients," he says. "It is a way to say to their families 'look I am not kidding, I really am in so much pain I can't work'. To have an independent judge announce that to the world is important to them."

When Binder isn't clanging the bell on behalf of his clients he likes to listen to the music of Steven Sondheim. One of the Broadway composer's best known songs is "Everything is Coming Up Roses". No wonder Binder likes Sondheim.

Charles Binder is a graduate of Georgetown University Law School and a member of the New York Bar. He has handled literally tens of thousands of cases, hearings, and Federal Court Appeals. Binder and Binder is based in New York City and has offices across the US.
READ ABOUT Social Security LAWSUITS

Posted by
Frank l huereque jr
on February 13, 2017
I have been denied social security disability and now the only way to file would be a civil appeal.
Posted by
Samantha
on April 5, 2015
Run as far and as fast in the other direction when it comes to Binder & Binder! They don't listen to the person who needs disability and once they mess up the case, they refuse to talk to you, they hang up on you, and while they have the case, they never give you one attorney throughout the process and you don't meet or anything. Before you know it, you are denied and they don't care.

If you don't believe me, check out their record of the hundreds of thousands of dissatisfied people who have filed complaints against Binder & Binder through the Better Business Bureau.

They literally botched my husband's disability case and then refused to have anything else to do with him after they screwed the pooch then realized they weren't going to get rich off his case! We are not alone. Check the BBB b/c there are hundreds of thousands of others who have endured the same problems we are facing, including the high probability we will lose our home b/c B&B dropped the ball and now we are down to nothing and my husband still can't work and hasn't been able to work for a number of years.

Posted by
Kim Sue Bilello
on September 7, 2014
Hi am in need of the best Disability attorney for federal court case ,and I believe you are my guy. I hope you will consider taking on my SSI case.