A recently published study seems to confirm concerns that SNRI side effects could include a risk of SNRI birth defects. The study, which involved Effexor, a serotonin-norepinephrine reuptake inhibitor (SNRI), found statistically significant associations between the use of Effexor during early pregnancy and having a baby with a birth defect. 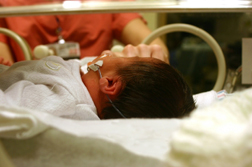 The study was published in Birth Defects Research (Part A) (2012) and involved studying venlafaxine (the generic name of Effexor) to determine if use of the antidepressant during pregnancy was associated with specific birth defects. Data was obtained from the National Birth Defects Prevention Study and included mothers with infants who had one of 30 birth defects compared with mothers with infants without birth defects. Researchers included anyone who took venlafaxine from one month prior to pregnancy through the third month of pregnancy as being “exposed” to the drug.

Researchers noted that although venlafaxine is an SNRI, due to the lower numbers of users, it is often grouped with a similar class of drugs, selective serotonin reuptake inhibitors (SSRIs), although SNRI medications affect levels of both serotonin and norepinephrine in the patient’s system. Studies that did examine SNRIs separately from SSRIs did not find a significant difference in the rate of birth defects between the two. Meanwhile, studies examining the risk of birth defects associated with SSRI medications have produced mixed results, with some suggesting an association and others suggesting no association.

More SNRI BIRTH DEFECTS News
Researchers found that use of venlafaxine while pregnant was associated with certain birth defects, including anencephaly, cleft palate, gastroschisis, coarction of the aorta and atrial septal defect secundum. They cautioned, however, that because venlafaxine is used to treat people who do not respond well to other treatments, pregnant women using venlafaxine may have more severe depression, which could cause the birth defects. Researchers also noted that their sample size was small, but pointed out that there was no difference between mothers in the venlafaxine-exposed or unexposed groups regarding other risk factors such as alcohol consumption, meaning those were not likely causes of the birth defects.

Still, they theorized that it is possible venlafaxine affects craniofacial and cardiac development, resulting in the types of birth defects seen in the study. Researchers concluded by noting that additional studies are needed to confirm the results of their study.