Louisiana resident Celestine Burrell recently filed a a slip and fall claim against Kmart Corporation after she allegedly slipped in water while shopping, causing her to fall down. 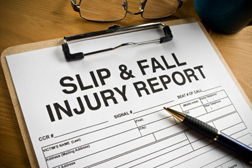 The Louisiana Record reports that Burrell is seeking more than $900,000 in damages in the lawsuit, which was filed last month in federal court in New Orleans.

More SLIP AND FALL News
The suit claims that Burrell was shopping at the Kmart store in Mandeville, Louisiana, in September 2010, when she slipped on water that was allegedly caused by a spill or leak between checkout cashiers. The plaintiff claims that the water leak could be seen by at least two cashiers at the store.

According to the news source, the slip and fall lawsuit seeks damages for medical expenses incurred, a loss of wages and earning capacity, and physical and mental pain and court costs. The plaintiff has reportedly requested a jury trial.

Slip and fall accidents are particularly dangerous for older adults, as 2.2 million nonfatal fall injuries among Americans aged 65 and older were treated in emergency departments in 2009, the last year for which data was available, according to the Centers for Disease Control and Prevention.


READ ABOUT SLIP AND FALL LAWSUITS

Posted by
Aaron Burton
on August 12, 2014
on 7/4/14 I fell because a spill was not cleaned up nor was there any warning posted. I had just checked out and was exiting the store proceeding to my vehicle. While exiting through the dual door vestibule area (main exit '/ entrance). I stepped in a spill, fell to the floor which caused acute pain and increased the intensity and frequency of the chronic pain i live with due to bilateral hip replacements and compound fracture of my right tib/fib and complex fracture to left femur near the knee. These conditions occurred in 2/29/2008 when I was involved in a motor vehicle accident. Due to BOTH legs being broken i was classified as NONweight bearing. I had to attend physical therapy to learn how to complete transfers to/from wheelchairs, cars, desks, etc (et all) .. After being confined to a wheelchair for months, once I was cleared to apply weight to both legs I immediately participated in aggressive physical therapy pushing through the pain to relearn how to walk. That sounds so funny , I bet you cant find many 30 yrs olds learning to walk again. I feel like a toddler, but I was so determined to regain my physical capabilities and specifically I have a burning desire to eventually walk with minimal assistance ...
I quickly agreed to purchase the property