Slip and Fall Bill in Florida Levels the Playing Field

The state of Florida has enjoyed the reputation as the best state to try slip and fall cases, due to one of the lowest requirements for burden of proof on the part of the plaintiff. State law does not require the plaintiff to prove that the defendant had prior knowledge of conditions that may lead to an accident; the plaintiff must simply prove that it happened. 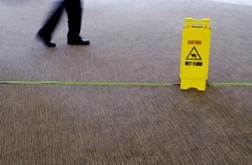 Samantha Hunter Padgett, general counsel for the Florida Retail Association, told the Naples Daily News earlier this month that prior to July 1 it was a relatively easy ride for the plaintiff, who simply had to prove that a slip and fall had occurred.

"The burden was on the defendant to prove they had maintained the premises in a safe condition," Padgett said. "Cases will still move forward and go to court. They still have to prove the premises had a duty to them and failed. But this introduces balance and fairness. This really puts both sides on an equal footing."

Proponents of the new legislation hope Bill 689 will put an end to frivolous slip and fall cases, where defendants invariably agree to settle in order to avoid the costs associated with a trial. Rep. Gary Aubuchon (R-Cape Coral), a big supporter of the change to Florida law, noted that slip and fall cases for retailers in the Sunshine State were double the national average.

Publix did not comment, but reportedly had provided Aubuchon with average slip and fall defense costs for its stores from 2000 through 2008. The stats showed that revenues increased from roughly $15 billion to about $24 billion. Legal costs that hovered at about one percent of revenues nationally grew in Florida from seven to 12 percent of revenues.

A state Senate bill stalled, but Aubuchon pushed it in the House.

More SLIP AND FALL News
Slip and fall events do happen. The Naples Daily News described a few of them: Emma Peterson slipped on some food while walking up a ramp to her table at Tommy Bahamas in Naples. Maria Coppola allegedly slipped on pebbles and sand on the steps at the Beach Hotel Golf Club, also in Naples. Claire Lupo brought a slip and fall lawsuit against Publix in East Naples after allegedly slipping on rain-soaked stripes at a crosswalk. Rachid Amroune was done in by falling acorns, as well as an alleged lack of drainage and handrails while walking to his car at the Third Street Plaza garage in Naples.

Such incidents will still happen, and injury does occur. Plaintiffs and their representatives will just have to work harder to prove negligence after July 1.

"The store is in a much better position to know how long the substance has been on the floor," said Paul D. Jess, general counsel for the trial lawyers' group, Florida Justice Association. "It's unreasonable to have them clean up every grape or banana lying on the floor within five minutes, but if it's been on the floor all day, that's negligence."

READ ABOUT SLIP AND FALL LAWSUITS

If you have suffered losses in this case, please send your complaint to a lawyer who will review your possible [SLIP AND FALL Lawsuit] at no cost or obligation.
Request Legal Help Now