While she is hopeful a serious rendezvous with Stevens Johnson Syndrome will not serve to derail her budding acting and modeling career, Josephine Ganner is nonetheless concerned massive blisters and other aftereffects of her near-fatal affliction may have an impact. 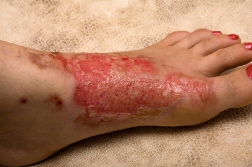 The pretty New Yorker had gone to Colorado to film a documentary about her brother, who reportedly suffers from mental illness. Ganner herself, according to the report, had been prescribed Lamictal for depression. Ten days after her dosage was increased, she began seeing the first signs of Stevens Johnson Syndrome rash.

Doctors didn’t know it was SJS at first, Ganner told a news crew from 7NEWS. “I was having a hard time breathing,” Ganner said, “and was having internal pain. Then, I started developing spots.” At an urgent care clinic in Boulder to which Ganner reported to get checked out, staff suspected allergies, then concluded Ganner had contracted Herpes. She was given some information and told to go home.

It wasn’t until the spots on her body began turning into blisters and she reported to a hospital in Boulder, that doctors saw the blisters for what they were - Stevens Johnson Syndrome symptoms.

That began a rollercoaster ride that nearly cost Ganner her sight.

Stevens Johnson Syndrome is a rare skin condition most often triggered by an allergic reaction to medication. Little is known as to why this is the case. However, manufacturers have been taken to task and have been the subject of lawsuits for allegedly dropping the ball with regard to the failure to inform consumers about the possibility of a potentially fatal reaction such as Stevens Johnson Syndrome.

In one case, a prescription form of a popular pain medication carried adequate warnings about the potential for SJS rash and more serious implications. However, the over-the-counter (OTC) version of the very same medication did not.

Stevens Johnson Syndrome is characterized by injuries to the skin that are akin to third-degree burns. Entire swaths of skin can blister and peel away. Blisters can form inside the mouth and throat. Some doctors have characterized the horrific condition as burning from the inside out.

SJS and its more serious cousin, Toxic Epidermal Necrolysis (TEN), can be fatal. In many cases, patients have not survived.

Ganner, it has been reported, is lucky to be alive. She was transferred to the Burn Center at University of Colorado Hospital. SJS patients are commonly treated in burn units, given the similarities between Stevens Johnson Syndrome and serious burns. Her breathing required assistance from a breathing tube, and she was heavily sedated. Pain medication reportedly led to hallucinations. Blisters formed across her entire body, inside and out, and Ganner required surgery on her eyes, which are often affected by SJS and TEN.

At the time of the 7NEWS report, Ganner had come through the worst of her Stevens Johnson Syndrome journey. Breathing on her own, she had undergone surgery on her eyes and the blisters had disappeared, replaced with noticeable blotchy skin.

But the actress, who is also a writer and comedian, told a 7NEWS reporter she is unsure if she’ll be able to function as an actress and appear on camera following her ordeal.

Ganner’s mother Karen Kronauer told 7NEWS that the ordeal has been hard for everyone.

More STEVENS JOHNSON SYNDROME (SJS) News
“It’s been difficult,” Kronauer said, “to see such a beautiful girl go through what she went through overnight. And the anger of it being triggered by a prescription wasn’t recklessness on her part. It was prescribed.”

It is not known if Stevens Johnson Syndrome lawyers have been contacted. Patients often do, after taking a medication without being told of the risk. Ganner’s brother apparently was also taking Lamictal, but wasn’t affected. “I took one for the team,” Ganner is quoted as saying.

Ironically, the documentary team that was initially focusing on Ganner’s brother will now produce a documentary on Ganner. “This has given me a greater purpose,” she told 7NEWS, “because people don’t know about this disease.” A disease called Stevens Johnson Syndrome skin disease.