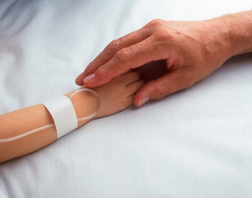 The plaintiff, Brianna Maya, was only three-years-old when she was given Children’s Motrin alternated with Children’s Tylenol every three hours to treat a fever. She reportedly developed Stevens Johnson syndrome - a severe allergic reaction to medication - after taking the medications, and was hospitalized. What started out as a rash and redness near her eyes turned into blisters inside and outside her body. Her injuries included open wounds over more than 80 percent of her body, organ damage, blindness in one eye and scarring over her skin.

Since her ordeal, Brianna has had multiple eye surgeries and developed seizures due to Stevens Johnson syndrome.

The family filed a lawsuit against McNeil Consumer Healthcare (owned by Johnson & Johnson) claiming that if they had known the skin rash was a sign of a serious complication of the medication, and a reason to stop using Children’s Motrin, they would have stopped using it right away, potentially preventing Brianna’s life-threatening reaction.

More STEVENS JOHNSON SYNDROME (SJS) News
In 2011, a jury awarded the plaintiff $10 million in compensatory damages, finding that Johnson & Johnson did not adequately warn about the risk of Stevens Johnson syndrome. According to ABC News (6/3/11), doctors who treated Brianna blamed Children’s Motrin for the allergic reaction. When Brianna developed the fever, the label for Children’s Motrin did not mention Stevens Johnson syndrome or Toxic Epidermal Necrolysis.

Johnson & Johnson appealed the award but a Philadelphia judge found that there were no errors of law in the $10 million award and therefore the verdict should not be overturned, The Legal Intelligencer (1/24/13) reports.

Stevens Johnson syndrome, and its more severe form, Toxic Epidermal Necrolysis, can occur in reaction to a variety of medications, including medications that have not previously caused a reaction in the patient. They are life-threatening, and patients who survive their ordeal often face permanent injury including scarring, damage to the eyes, damage to internal organs and repeated infections.

Posted by
Max W. Fleischmann
on February 17, 2013
I have tryed for a Law Firm to take my case of SJS & TEN as a class action Law Suit and was turned down several times because they are considering the STatue of Limitation.
What can I DO???? The case happened in the Hospital in Feb.2009.
Posted by
sheila
on February 7, 2013
It is about time a corporation has been held responsible for their negligent behaviors against consumers. More and more the FDA allows these companies to get away with hiding their true chemical nature and the side effects and damages that using these items can cause to the human body. Now if only the government would force Monsanto and other chemical companies to reveal what they are putting in our foods and when Genetically modified seeds and vegetables are used in our foods. The government has never made Monsanto do any kind of testing to reveal what these modified foods are doing to our bodies going as far as changing/altering our DNA. An independent study of Monsanto genetically modified corn was fed to rats produced massive tumors. So is this a conspiracy to create a health epidemic with the support of the government? With our government failing to protect our foods we can be sure this problem will continue especially since the CEO of Monsanto is being chosen by Obama as the head honcho for the FDA. Choose organic or grow your own vegetables.