"My 16-year-old daughter, Chelsea, was prescribed Lamictal to control her mood swings," says Shelly. "We were told she might get a slight rash but no one told us she would wind up in ICU with Stevens Johnson Syndrome (SJS ), which led to [Toxic Epidermal Necrolysis TEN." When Chelsea finally recovered, Shelly was told that TEN has a 70 percent mortality rate. "If I knew that sooner, I'd be in hospital too." 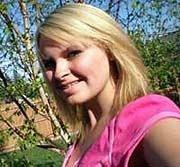 Shelly is also on Lamictal; she has been taking it for 5 years with no side effects. And in those 5 years she never read on the label anything about SJS; however the drug's label does list in its side effects a rash. It also says that "Lamotrigine (common name) should not be taken by people who are allergic to lamotrigine or any ingredients of the medication." But people like Chelsea find out they are allergic by taking the drug!

"By the time Chelsea was up to 100mg of Lamictal per day—about 4 weeks on the drug—she developed a slight rash on her chest," says Shelly. "Her pediatrician looked at it and advised Benadryl for the itching. The next day we were back to the doctor—it had spread all over her chest and her lips were swollen and blistered. But he just gave her more Benadryl. He also did some research while we were in the office and diagnosed Stevens Johnson Syndrome or SJS, and blamed the Lamicatal. 'SJS has a 40 percent mortality rate so if she stops breathing, take her to ER,' he said. And if we didn't make it to ER in time?

Sure enough, next morning Chelsea couldn't breathe through her mouth and just slightly through her nose. We rushed her to ER where she had a nebulizer treatment.

We were in this hospital for 6 days; the rash and blisters were over her entire body, inside in her mouth and down her throat. Every day the SJS was getting worse. She was given morphine and Atavan and Tylenol for a fever of 104. 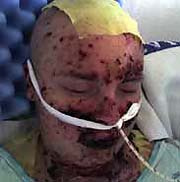 And another girl at the hospital had SJS—it isn't that rare.

After 6 days an infectious disease doctor looked at her and demanded she get air-lifted to the burn unit at Harborview Medical Center in Seattle. We wanted to go there at first…If it wasn't for him, Chelsea would be dead. She had TEN—a much more severe reaction.

Within 15 minutes upon arrival, she was in surgery. They shaved her head and got all the blisters off; she had a pig skin graft from waist to face, the top of her head and part of her arms. When Chelsea came out of surgery they took her up to ICU. Luckily she didn't need to be intubated. She was in Harborview for just over 2 weeks.

She never complained, even though this happened 5 days into her summer holiday. Chelsea will have a great story to tell when she goes back to school. She got home July 7th and now the pig skin has sloughed off; she is healing. However, her skin will be discoloured—blotchy white and brown—for about a year; her fingernails are falling off, she has muscle and joint pain and insomnia. When Chelsea was prescribed a drug for insomnia I called Harborview: We are terrified of taking anything unless Harborview approves.

More SJS News
I want a formal apology from this drug company. And they must be held accountable, to educate both the public and the medical community. At first I was in shock when Chelsea's pediatrician told me she had SJS. Then I was furious; we were never told that SJS was a possible side effect. I want this drug company to get a black box warning; we shouldn't have to ask, we should be informed about any side effects."

Scroll down the Lamictal website, where it says the following:

LAMICTAL may cause a serious skin rash that may cause you to be hospitalized or to stop LAMICTAL; it may rarely cause death. There is no way to tell if a mild rash will develop into a more serious reaction. These serious skin reactions are more likely to happen when you begin taking LAMICTAL, within the first 2-8 weeks of treatment. But it can happen in people who have taken LAMICTAL for any period of time. Children between 2 to 16 years of age have a higher chance of getting this serious skin reaction while taking LAMICTAL.

Shelly wants to know why this warning never reached her family.

Posted by
Marcia Eddy
on December 9, 2017
I am 75 years old and 37 years post op a brain anuerysm. I took all known antiseizure meds which gave me a rash every time . Finally on Keppra with no problems. I was living in Michigan and moved to Texas. Neurology here stopped Keppra and started Lamactil. Rash and discontinued after 6 weeks. Fiery pain and itchy ever since. Now developing blisters and blood blisters on back and chest. Quit this doctor and all meds she has me on. Seeing a dermatologist Monday. I am sorry for each one of you with problems. Godspeed.
Posted by
Laurie
on May 27, 2016
I've taken Lamotrigine/Lamictal for 5 years with no side effects. It is a wonderful medication for bipolar disorder, depression, anxiety and has shown promise in treating ADHD. SJ syndrome is a rare but serious side effect that can be caused by many, many drugs (although Lamotrigine does carry a higher risk, especially when not taken correctly). I would not let that possibility discourage you from taking this medication.
Posted by
Sam
on March 5, 2016
I was taking lamictal for 6 weeks, after a month, I had sore throat than runny nose, sneezing, body aches. Flu like symptoms. I was doing some research and find out that flu symptoms is the beginning of SJS than little rash on chest, some twitching in thighs and eye, cough which will not go away. I stop lamictal right away, was on 75mg. I hope nothing bad happens after I stop meds.
Posted by
burnRN@caution.com
on February 14, 2016
I found this page because of the multiple cases of TENS I have seen in my burn unit this past year. Right now we have a young man fighting for his life. I would suggest to those of you experiencing a mild rash to stop taking it immediately and know where your nearest burn center is for evaluation. Most ERs and primary MDs don't recognize it until it is very advanced.
Posted by
Linda Lee
on January 12, 2016
Horrible, itchy rash that will not go away. I have been to the ER, Primary Care, and Dermatologists.
This medication is poison...I was only taking 25mg.
I can't sleep or function with this itchy rash all over my body...
It has been debilitating over Christmas, New Years, and two weeks of the new year.
I can't continue like this. No medication helps.

Posted by
Diana Booth
on March 5, 2014
I was given Lamictal in 2011 for a mood disorder. With in the first 48 hours I was in the ER with a whole body rash!! I got there soon enough to get steroids to prevent SJS and was not diagnosed with SJS.Yet I only to 1 or 2 pills and I dealt with this horrible rash all over my body for 6 WEEKS!! I HAVE MULTIPLE SCARS FROM THE RASH! THANK GOD I'm a RN and knew about SJS or else I wouldn't have went to the ER so quickly....and the end results could have been much worse than scars! LAMICTAL NEEDS TO BE REMOVED FROM THE MARKET, ALONG WITH OTHERS THAT CAUSE SJS! THE RISK DO NOT OUT WAY THE BENEFITS!!!
D.BOOTH RN(Inactive/disabled)
Posted by
Bruce
on February 27, 2014
My brother Paul is in the ICU burn unit at ECMC with SJS from that same horrible drug Lamictal. He is suffering so bad. He was prescribed this because he had a seizure while on his other epilepsy medicine Depakote. The doctor that prescribed this terrible drug should of known that the two don't mix and it increases the chances of getting SJS. I have never seen anything so horrible in my life. My poor brother should of never had this happen to him. We pray every day for him to get through this absolute hell. It's hard on all of us. This evil drug needs to be taken off the market permanently. We pray he makes it out of this alive. He is suffering like I have never seen a person suffer. We plan on suing for sure.
Posted by
Cindy Evans
on February 26, 2014
My 5 year old granddaughter was recently started on Lamictal for seizure's. My daughter was warned that Lamictal can cause a serious rash but was told it was very rare. After just one week on it she developed a rash on her face. My daughter took her to the E.R. only to be sent home. The next day the rash covered her whole body except her head. She was admitted into the hospital and By the next day, she was pretty much stripped clean of her skin and is on a ventilator. She is still in the hospital and is listed in critical condition. This is so wrong. I know they said this rash is rare, but since my granddaughter was diagnosed with SJS I have looked into it more and it doesn't seem so rare. I'm not so sure that the benefits of this drug out way the risks. I believe they should take this and any drug that has this much of a risk off the market.
Posted by
Karen Rhodes
on March 10, 2013
My son 17 age took lamotrigine (lamictal) first 2 weeks. We took him to ER at Valley Medical Center in Renton, WA. Dr said stopped to take lamictal. Took two medicines for itch less and predisone and went home. Next day he has more rash and itch and feel like burn. I took him to ER again. 3 hrs later, Dr said transfer to Swedish hospital in Seattle. My son stayed overnight at Swedish Hospital. Dr said recommended to transfer to Harborview Hospital in Seattle. Harborview is best service for burn skin. He stayed at Harborview Hospital. Found out his white blood cell count was very low and transferred to ICU. Fed food tube through his nose to stomach for 3 days and bad swollen, burn and reddish rash and blisters. Till his white blood cell counts improved to 7.0 level and transferred to regular room for 6 days. he has been improving very slow. He didn't go to school for 3 weeks. I feel bad and unfair for him that he is young and innocent. The Lamictal effected bad side effects. Please help us to suit the medicine company. It is unsafe for young kids. My husband missed to work for a week cuz of our son in the hospital. I had been worrying everyday and overnight not good sleep plus I have multiple scelorsis dx.