A woman who was diagnosed with Stevens Johnson Syndrome (SJS) has been awarded $21 million in her lawsuit. The plaintiff alleged she lost her eyesight after taking a medication that she claimed caused her SJS. 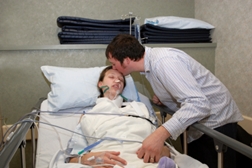 The Associated Press reported on 9/08/10 that Karen Bartlett started taking Sulindac early in 2005 to treat pain in her shoulder. Approximately two weeks after starting the medication, she developed red spots on her face and irritation near her eyes. On February 2, 2010, Bartlett was admitted to the hospital with a rash, eye pain and throat pain.

Bartlett was diagnosed with Stevens Johnson Syndrome and toxic epidermal necrolysis (TEN). She suffered severe burns on her skin, mucous membranes and eyes and spent 112 days in hospital. According to the lawsuit, Bartlett lost her sight and suffered permanent disabilities due to damage in her throat, stomach and lungs. She is also permanently scarred.

Stevens Johnson Syndrome is usually caused by a severe allergic reaction to a medication. It causes the victim's skin to become detached and lesions to develop in the mucous membranes. Victims can develop life-threatening infections as a result of lost skin or injury to internal organs. Those who survive are often left with lifelong injury, including blindness, lung damage, dry-eye syndrome, chronic obstructive pulmonary disease, permanent loss of nail beds and severe scarring.

More STEVENS JOHNSON SYNDROME (SJS) News
According to the Stevens-Johnson Syndrome Foundation (sjsupport.org), almost any medication can cause SJS, although the most commonly linked drugs are anti-convulsants, antibiotics and anti-inflammatory medications. Toxic epidermal necrolysis is a severe form of SJS.

The lawsuit alleged that Sulindac has the highest number of reported incidents of SJS/ TEN of any non-steroidal anti-inflammatory drug available on the market. Bartlett's lawyers argued that the drug should not have been on the market when it was prescribed to Bartlett.

A lawyer for Mutual Pharmaceutical Co. said the drug was approved by the FDA for 32 years and noted that risks associated with drugs is a reality.