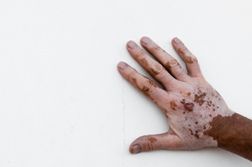 According to the 5/12/10 edition of the Madison and St. Clair Record, the plaintiffs claim that doctors prescribed either them or their deceased relatives carbamazepine drug products, which caused them to develop skin rash, itching, skin discoloration, skin exfoliation, shedding of the hair, shedding of the nails, loss of skin pigmentation, hives, burns, scarring, damaged eyesight, permanent damage to their internal organs, hypersensitivity, Stevens Johnson Syndrome or Toxic Epidermal Necrolysis Syndrome (TEN), or in combination.

One aspect of the case involves the effect of the drug among different races, such as African Americans, Hispanics, native Indians, Asians and Caucasians, who face an increased risk of developing SJS and TEN due to their genetic makeup. African Americans and Asians remain especially prone to developing the life-threatening skin conditions because of a gene they tend to carry, according to the complaint.

"Defendants knew, or should have known a significant portion of deaths and severe side effects, described herein, resulted from carbamazepine products have included African American persons and children who were found to have increased risks of carbamazepine SJS and TEN in the medical literature," the suit states.

Carbamazepine has been sold under the brand name Tegretol and was introduced to the market in 1968 under less than ideal circumstances. According to the Record, the US Food and Drug Administration (FDA) initially refused to approve the drug, claiming that the product "would appear to be an agent that possesses significant toxicity." On April 10, 1967, following a drug manufacturer's further attempts to introduce the drug to the U.S. market, the FDA found that Tegretol had little to no margin of safety based on animal studies performed, the suit says.

According to the complaint, the FDA wrote that "there is an overall attempt by the sponsor to reduce the significance of the findings of toxicity in the experimental animals and we [the FDA] feel that a clear statement of this agent's toxicity is called for."

On March 11, 1968, after the manufacturer submitted repeated applications for Tegretol, the FDA approved the drug, but only for the treatment of pain associated with trigeminal neuralgia, the plaintiffs claim.

More STEVENS JOHNSON SYNDROME (SJS) News
Five years later, Novartis, formerly CIBA Pharmaceuticals, began lobbying the FDA to approve Tegretol as a treatment for epilepsy, all the while hailing the drug's safety and its non-carcinogenic nature. The FDA was not impressed by the manufacturer's alleged year-long animal study involving rats, which Novartis used to prove the drug to be non-carcinogenic. The agency approved Tegretol as a drug of last resort, for use only with epileptic patients who did not respond to treatment with other drugs, the suit states.

However, Novartis aggressively marketed Tegretol for use as a first-line treatment of epilepsy, plus for a broader use as an anticonvulsant drug and as a mood stabilizer. While marketing the drug's efficacy, Novartis failed to inform the public of its associated dangers, such as Stevens Johnson Syndrome and Toxic Epidermal Necrolysis Syndrome, both of which cause severe skin reactions, claims the suit.