It is a nightmare no child should face, especially a child of 12 looking forward to hitting the milestone that heralds the teen years. But Hannah Manche and her parents, a family from River Falls, Wisconsin could have no idea that the doxycycline antibiotic Hannah had been prescribed to combat what was suspected as Lyme disease would launch the young River Falls girl into the horrifying journey that is Stevens Johnson Syndrome. 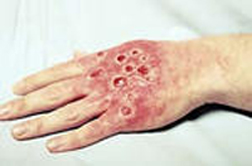 Actually, worse. MyRacineCounty.com (7/23/16) reports that what Hannah suffered through was even worse than SJS: Toxic Epidermal Necrolysis Syndrome (TENS), the more severe form of Stevens Johnson Syndrome. While SJS is rare, TENS is even more so. But when TENS hits, the outcome has been described as a nightmare.

SJS and TENS usually begin with a Stevens Johnson Syndrome rash, usually appearing soon after the use of a medication to which the patient appears to have an allergic reaction. Doxycycline is described by the World Health Organization as an essential medicine, and has been available since 1967. The Manche family could have no quarrel with a drug that had been around for so long.

And yet, following two doses of doxycycline, Hannah began presenting with Stevens Johnson syndrome symptoms. The rash quickly escalated to burns and blistering on both the outside, and inside her body.

Stevens Johnson Syndrome and TENS have been likened to the body burning from the inside out. Blisters form in mucous membranes, in the mouth and throat. The outer skin blisters and burns, coming off in sheaths. It’s common to treat SJS and TENS patients in burn units, as Stevens Johnson Syndrome skin disease is akin to serious burns resulting from fire, steam or extreme heat.

In Hannah’s case, according to MyRacineCounty.com, the 12-year-old lost all of her outer skin. She also suffered internal blistering. SJS can also affect the eyes; Hannah was left essentially blind for nearly a year.

Hannah lived. But she was, in spite of her family’s prayers and pleadings, essentially blinded for more than a year, able to see mostly shapes and colors as if peering through broken glass. Fortunately, the blindness has not turned out to be permanent. However, her vision is and never will be what it once was. The now-17-year-old is required to wear special contact lenses which allow her 20/30 vision.

Those lenses are important for another reason ??" the retention of saline solution, which is necessary to replace Hannah’s tears. Her eyes no longer produce them. “Like a small fire in your eye,” Hannah added in comments to MyRacineCounty.com, noting the pain rates an eight on a scale of one to 10.

More STEVENS JOHNSON SYNDROME (SJS) News
Hannah’s journey through Stevens Johnson Syndrome skin disease and TENS put her in hospital for a month. She was put on a ventilator, as blisters were forming in her lungs and she could not breathe on her own. The pain was intense, and doctors put her into a medically-induced coma for five days in an effort to spare the 12-year-old girl from the intense pain.

With her outer layer of dermis stripping off in sheaths, Hannah was wrapped in a biosynthetic second skin to aid in regrowth of her skin and to ward off infections.
Today, Hannah is 17 and readying for her senior year in high school. However, her bout with SJS means she will never be completely healthy again. She must live with the scarring. And she has been bullied, due to the change in her appearance.

Hannah takes it all in stride, thanks in part to a deep faith that leaves her with a belief that she remains beautiful, regardless of how others see her or choose to see her.

There is no indication if the family has been in contact with Stevens Johnson Syndrome lawyers, in order to pursue compensation.

Posted by
Lynda Silver-Rice
on August 7, 2016
I spent a month in the burn unit after the burn Icu almost two years ago after taking the sulfa drug Bactrim. I still get lesions and skin coming off and it's extremely painful.
100% of my body was covered in burns, from my scalp to under my toe nails. I have pictures to prove it. I had them inside my mouth, nose, ears, eyes, vaginas and Anus. I get recurring burns on my face, vagina and anus. I get lesions as well as the skin peeling off. The dr. Has now diagnosed me with ten as well as sjs.
The pain is still unbearable. I stay to weak to have much of a life. I finally have health insurance so I can attempt to get it treated.
All from taking an antibiotic.