Len is 27 now, but no amount of time will erase the psychological scarring he still suffers after an almost fatal childhood occurrence of Steven-Johnson Syndrome (SJS), an allergic reaction to a drug.

At 9 years old Len had been prescribed the antibiotic erythromycin for pneumonia. On his way home from school shortly after beginning the treatment, Len recalls his eyes feeling itchy and achy.

"My mom gave me some Advil, I went to sleep, and when I woke up hours later my eyes hurt and there were large blisters all over my face and body. I was scared."

"My aunt, who's a nurse, came over and told my mom it wasn't chickenpox like she thought; in fact it wasn't anything she recognized. They took me right away to Children's Hospital in Detroit." 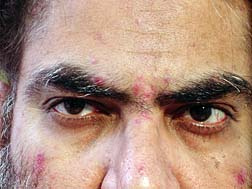 Len was quarantined for a month.

"I was super weak. At one point I tried to get a glass of water off the table beside me but I was too weak to pick it up. I couldn't use the bathroom by myself because I had blisters on my hands and feet also. My eyelids and lips were swollen and sealed shut from excess mucous and scabs. My fingernails fell off but eventually grew back. Eventually the scabs on my mouth disappeared and I was able to reopen my mouth and eyes."

His mother recalls that the doctors shared precious little information of what was transpiring but they did admit it was the first such case they had ever seen and took pictures for their medical books. One explanation offered up was that Len had been stung under the tongue by a mosquito but, on the other hand, they also told her that if he ever took again penicillin it might kill him. Erythromycin, the drug given to him at the hospital, is classified a penicillin.

"They said if he'd been a baby he would have died, but his age saved him," remembers his mother.

Len was released to home, with dark sun glasses for the sensitivity and a warning that his twin could contract the contagious infection that still resided in his body. It did in fact recur at Christmas, but in Len only.

"I remember trying so hard just to talk; I could eat with a straw out of the one side that was open. My parents gave me some salve to put on my eyes and some thick nasty stuff to drink - it was hard to swallow. And some green gel caps. My blisters popped due to my own interference as you do when you're a kid but it left pink marks."

But that wasn't the most bitter pill to swallow.

More News
"I was out of school for three months and going back was a big event. My homeroom teacher had organized an assembly in my honor to make the kids aware of my illness. But I still got teased a lot; I was called ugly and spotty. When you're 10 you don't have the foundation or are socially mature to deal with the teasing. It was hard to make friends."

"This continued throughout my adolescence and into adulthood. I'm left with the scars now. Due the infection in my eyes many of my eyelashes have fallen out. My eyelids still appear abnormally large, without the eyelashes. My left eye is disproportionate to my right, possibly due to scarred tissue under my eyelid. In addition, my eyes constantly tear and form excess mucous. I'm still insecure about this condition. I feel abnormal."

"I stay away from doctors and there's nothing anybody can say to change that. People should be more aware of the effects of pharmaceuticals. It's not fair for the government to let them get away with selling the drugs without warming."