Bactrim Causes Third-Degree Burns Inside and Outside Body

A replacement family practitioner prescribed Bactrim, an antibiotic to clear up Vera's persistent bronchitis when the original prescription of conventional cough medicine did not work. Within 2 days Vera broke out in hives then blisters on the soles of her feet and ended up 2 weeks in the intensive care unit. Doctors say she is lucky to be alive because many have died from Stevens-Johnson Syndrome (SJS), a toxic drug reaction.

"I was scratching and itching all over my arms, back and neck. I couldn't even go to church that Sunday." recalls Vera just after starting her treatment in mid-June, 2007. "On Monday I just lay in bed. I was scared to some extent, you know I was wondering what was happening. I called in sick; I mean what can you tell your place of work in this situation, but on the other hand I couldn't afford to be away from work for two days either. On Tuesday I noticed more hives on my back so my husband, who was getting dressed to go to work, said 'I can't leave you like that', and he drove me to emergency."

"They had to wheel me in because they saw I couldn't walk. The blisters on my soles had started to peel and they had to cut off all my clothes or they'd peel my skin off." 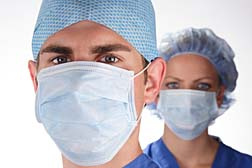 Bactrim had caused 3rd degree burns to the inside and outside of Vera's body and the hospital had to seek out a burn unit. She spent two weeks in intensive care followed by another in the ward.

"Hundreds of doctors and interns came by to take my picture. They said, 'wow, you're lucky to be alive.'"

"I just wanted to get out of there. I couldn't sleep, and when I saw my face was all burned I was so worried I'd be scarred forever. My daughter told me I didn't have any lips. My throat was burned on the inside so I couldn't swallow and in the two weeks I lost 15 1bs. I asked to be discharged; my daughter, who is studying to be a nurse, could apply the creams and whatever, but the doctor didn't agree, told me I was taking a risk."

Vera had no choice but to return to work in September, if only for three days a week as she was still under the doctor's care.

More News
"Right now I'm so stressed out, I can't go to work sometimes or I have to take the day off when I have my doctor's appointments."

"I'm being treated for high blood sugar and liver problems from all the meds they had to give me to get rid of the burns. I'm also on meds for depression and I've lost the vision in my right eye. My regular doctor had been away when this happened and no one told her when she came back. It was a replacement at her office who gave me the Bactrin. My doctor only found out when I called her a month later. She'd never heard of Bactrim having that effect but about a month ago I told my dentist why I hadn't kept my previous appointments and he said he knew people who hadn't come out alive after an allergic reaction to Bactrim."

"I'm just looking around now for help from someone who is willing to help me get some money back for the pain and expenses."

Posted by
james
on July 14, 2019
i took bactrim that was prescribed for my daughter, and it gave me a severe burn in my genital region....it was solely the bactrim as I am not sexually active, outside of my wife, and once I stopped taking the medication the inflammation / burn stopped all together. Currently, I am treating a second degree burn in my genital region as a direct result of the medication BACTRIM.