When Yvette S's four-year-old daughter was prescribed Bactrim for her urinary tract infection, Yvette did not know that Bactrim could cause Stevens-Johnson Syndrome.

Her daughter was given Bactrim for 10 days. Two weeks after her prescription was finished, Yvette's daughter began complaining that her eyes were itchy. The next day, Yvette noticed that her daughter's hands were red, she had a rash on her chest and she had a fever. By the third day, there were bumps all over her body.

"The next day there were blisters all over her ears and she was having trouble breathing so we took her to emergency," Yvette says. "Things started going downhill from there. She had blisters everywhere and was diagnosed as having Stevens-Johnson Syndrome. The bumps started to clump up and formed together and became a dark, burgundy red color. By the next day, she had blisters in her mouth and from head to toe. She was checked into ICU and couldn't even walk on her feet. The blisters were from her scalp to the bottom of her feet. 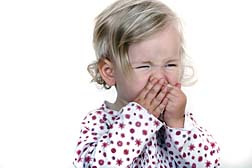 "She was in a lot of pain. Her skin was starting to come off. The burn unit came in from another hospital to remove her skin and wrap bandages every day. An ophthalmologist came in to prescribe something for her eyes. The inner skin of her mouth sloughed off, so did the bottom of her feed and the top of her tongue. It even affected her esophagus. About 85% of her skin came off and for two weeks they [doctors] could not control her temperature. They gave her Tylenol and ibuprofen to get the fever down. When her skin started healing they moved her.

"She had a lot of bleeding in her mouth and lips. It's also possible the inner lining of her esophagus sloughed.

"She still has appointments with the ophthalmologist. In the hospital she had sensitivity to light, probably because SJS affected her eyes.

"The doctor said that SJS is a rare reaction, but when I tell friends and family about what we went through, they all know of people, adults, who developed it, so how can it be that rare? And those are adults. My daughter is only four.
"I would have used something different if I had known about this side effect. They need to tell you about the side effects so that you can make a decision about whether or not to use it. Some drugs cause side effects, but this can cause blindness and death. It affected her entire body: Her skin fell off."