August, 2007 has been designated as Stevens Johnson Syndrome (SJS) Awareness month and has so far been recognized in Colorado, Arizona, Alabama, Connecticut and Tennessee. However, with SJS affecting more than two million Americans and causing more than 140,000 deaths among hospitalized patients each year, the SJS foundation and countless sufferers of this potentially fatal disease are hopeful that more states will take notice.

SJS is an allergic reaction--an immune-complex-mediated hypersensitivity disorder-- that is commonly caused by drugs, many of which are over-the-counter. Allergic drug reactions are the fourth leading cause of death in the US. Almost any drug can cause SJS, even ibuprofen. Other drugs that have been linked to SJS are Bacrtrin (the SJS Foundation reports that every third caller has taken Bactrin) Bextra, Allopurinol, Carbamazepine, Phenytoin and sulfa antibiotics (Bextra contains sulfa). 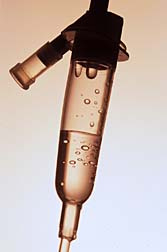 Some of these drugs have been given warnings on their labels and Bextra was pulled from the market after the FDA received reports that 87 cases of severe skin reactions were associated with the drug, including SJS and toxic epidermal necrolyis syndrome. (On April 7, 2005 the FDA asked Pfizer, Inc. to withdraw Bextra from the market: Pfizer first acknowledged risks associated with Bextra in October of 2004.)

Unfortunately for many, these warnings have come too late. Although SJS is included as a warning on the packages of many drugs on the market, few have black-box warnings. Jean McCawley started the SJS Foundation after her daughter Julie contracted SJS from taking Phenobarbital for her epileptic seizures when she was only 11 months old.

"We were told the side effect of this drug was drowsiness," says McCawley. "You can imagine my surprise when she was diagnosed with SJS and spent 26 days in the burn unit. Her skin was burnt and was sloughing off 80 percent of her body. Her entire face was unrecognizable: she looked like she had been deep-fried. She was on a morphine drip. When she was conscious she would cry all the time." Julie is now 13 but still suffers the after-effects: she is blind in one eye and visually impaired and light sensitive in her other eye.

The Bextra withdrawal was too late for 75-year-old Eleanor Dearman. She took Bextra for pain (it was commonly prescribed for the relief of osteoarthritis and rheumatoid arthritis) but after about six months she started to get lumps in the back of her throat and had difficulty swallowing. "Then my mouth started peeling, I could literally scrape my mouth and skin would fall off," says Dearman. "I saw my doctor but he couldn't figure out what was wrong with me. In fact he asked how Bextra was doing and I said fine, so he doubled my dose.

"Everything I ate tasted like hot pepper. And my skin was getting worse--even my vagina was peeling. And my breathing was getting worse; I had asthma to begin with and was able to control it with an inhaler but that wasn't working. In March of 2003 I finally went to the hospital.

They kept me on Bextra, even in the hospital. I told my husband that I had to stop this drug, because nothing was getting better.

I was watching a talk show and it featured a woman with SJS; her skin was peeling off her entire body. I thought ohmigod, this is the same thing I have.
I went online and I couldn't believe it. Bextra was listed as one of the drugs related to these symptoms. 'Now I know that I have SJS,' I told my husband.

I told everyone I knew that if they were taking Bextra, to stop taking it. One of my friends just started taking Bextra before it was taken off the market. I said to her, 'Get down on your hands and knees and thank God that you can't take it anymore'.

I am still not over this. I still peel from my vagina and now and again the inside of my cheek will peel. It is spontaneous; I never know when it is going to flare up again."

More News
According to the American Medical Association (AMA), less then one percent of all drug reactions are reported to the FDA and many sufferers are left frustrated, not knowing where to seek help. That's where the SJS foundation comes in. It was founded with a small core support group in 1996. "Today, our mailing list comprises over 1,500 people and in five years we have had over 600,000 hits on our website," says McCawley. "We do not believe SJS is rare, as we have been told. What we do believe is rare is that not many people are reporting it to the FDA.

"People don't realize that they can report side effects from drugs; they think physicians are doing it," adds McCawley. "When my daughter's case was reported in 2004, only 10 SJS cases were recorded with the FDA for that entire year. I personally spoke with 50 people that year that had contracted SJS or knew a loved one who had."