SJS: Where Is the Justice?

"Is there any justice for victims of Stevens Johnson Syndrome?" asks Marcia Toler-McCullen, whose mother suffered SJS as a side effect from Z-Pak. Marcia gave the hospital explicit instructions not to give her mother any drugs with blue dye, "but I don't think they bothered to read her chart thoroughly and I know they don't take time to review and research every med to make sure they will not hurt or kill some patients who are very sensitive like my mother." 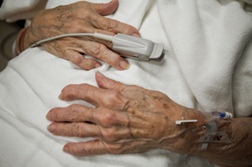 Marcia continues: "My mom, Velma L. Toler, got sick in 2009 and was hospitalized, likely for pneumonia. Two years previously she was given Zithromax and didn't have any reactions or side effects, so this time she was prescribed a six-day blister pack with the name Azithromycin Z-Pak. When I gave it to my mom, she said, 'This is not what I had before.' She said that she had Zithromax, which were white pills and in a prescription pill bottle. I told her that on the prescription it said that is was the generic for Zithromax, so I assumed it was okay for her to take. Doctors and pharmacists know her problems with other drugs and blue dye— she took the Z-Pak for six days.


"Many doctors looked at her, horrified. None of them had ever seen anything like this before, and had no idea what it was or what was going on"
"Instead of getting better, she got worse. She was prescribed even more Z-Pak, which is almost like sentencing her to death.

"The right side of my mom's face was swollen and blood red; she had a fever and her eye had closed. This was on a Saturday. By Sunday I took her back to Immediate Care. The doctor was hesitant to say it was a drug reaction, but told her not to take any more Z-Pak. He would not have given the same antibiotic back-to-back in two weeks, especially the Z-Pak. I took her home and kept a very close watch."

"Her skin looked like boiling water has been poured on it"

"On Monday I took her to ER and she was admitted with facial cellulitis. It was all in her face and eyes, itching and burning, excruciating headache, and literally driving her crazy. She finally got better and I took her home, but a week later her neck area became severely red; it was burning and itching and looked like scalded flesh. She was in severe pain.

"She was given Vancomycin injections while in the hospital. I researched Vancomycin to see if this could be triggering the problem a second time. She is allergic to almost everything in the world, especially blue dye in anything, and other antibiotics, and she cannot take any of the good drugs to fight infections. According to my research, Vancomycin does have blue dye in the oral form. I cannot find out if it is in the injection form as well. We tell all doctors that she cannot take anything with blue dye, because she is in agonizing pain with this scalded, red skin that looks like boiling water has been poured on it.

"I spoke with a doctor friend of ours this week, and he stated that the Vancomycin could have caused this outbreak. Then my mother's doctor confirmed that my mother had SJS and was so sorry that she had suffered like this. She told my mom to never again take another antibiotic.

"Years ago she was given ciproflaxin through IVs for almost a week, but this medication also made her worse. Many doctors looked at her, horrified. None of them had ever seen anything like this before, and had no idea what it was or what was going on.

"Now, after all these decades of suffering, she has been diagnosed with SJS. And she still suffers. I sprayed some Neosporin on her neck to see if that would help the burning and itching, but she said burnt even more. So we bought some kind of new itching cream and she said that burnt her up as well."

"Nothing to do but wait"

More STEVENS JOHNSON SYNDROME (SJS) News
"It seems there is nothing that can help the pain but wait until it is out of her system altogether. She says she thinks there is a doctor out there somewhere that can help her, but I told her with all the research I have done, it takes other antibiotics or hospitalization in a burn unit. There seems to be no cure for this disease. I am certain that years ago, she should have been in a burn unit, but no one knew what was going on. She may have needed to have been in one this last time.

"There should be warnings that these drugs can cause SJS. If the Azithromycin Z-Pak had a black box warning, we should have been told about it. If we had known that it could cause severe skin reactions like this, she would never have taken it. I have everything documented from all the hospitals, doctors and pharmacists. With her severe allergic reactions to medications and blue dye, she should have been warned that SJS could happen.

"Why aren't doctors required to tell their patients who have severe skin reactions to antibiotic that one antibiotic could cause a reaction similar to one you have had in the past? And what is the purpose of a black box warning if the doctors are not going to tell the patient about it?