Since being diagnosed with Stevens Johnson Syndrome two years ago, Sandra, a mother of two, is terrified that one of these days she might need to take an antibiotic. She will definitely never take Ibuprofen again—the medication that could have killed her. 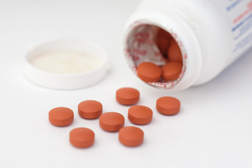 "In May of 2009, I took Ibuprofen for a headache and that evening I felt sick, but I just chalked it up to the Chinese food I ate for dinner," says Sandra. "That night I was sure that I had food poisoning so I went to our local hospital—when I arrived at ER my eyes were scarlet red and by the time I was admitted I had a rash all over my body. The spots, which started on my arms and then spread to my face and legs, turned into blisters; no one knew what was wrong with me.

"Not long after I was admitted, a nurse asked if I was on any medication. I said no because it didn't occur to me that Ibuprofen could have harmed me. They could only give me vitamins by IV so I wouldn't get dehydrated; they knew that I was having some kind of allergic reaction but they didn't know what it was—they assumed that I had taken some kind of antibiotic. Several specialists and a litany of blood tests later, one of the doctors told me that I had Stevens Johnson Syndrome—a rare and life-threatening reaction to a drug. But what drug could have caused this?

"They kept questioning me and I finally remembered that I had taken the Ibupofren. They never asked me about that specific medication, and it never occurred to me that the most common over-the-counter medication could cause SJS.

"I couldn't see how bad my condition was because my eyes were really messed up but I knew it was serious because I had a catheter placed to get ready for surgery—they were going to slough off my skin. They also said that I was going to get an infection in my lungs but the surgeon said he couldn't get a tube down my mouth and explained that I was too 'wide open,' meaning that my throat was too raw for surgery. It wasn't scary at the time because I didn't understand the seriousness of this disease until after the fact, and I assumed that I was in good hands at the hospital.

"As it turned out, my recovery was a miracle…

"I was in the burn unit for two weeks. At one point my eyelids stuck together and the eye specialist scraped open my eyes. He said I was very strong because I refused to take morphine; I just took Tylenol 3's and vitamins, and I was good to go. It wasn't until I was able to take a shower that I saw what this SJS had done to me—black skin was flaking and falling off my body, like I had been burned all over.

More STEVENS JOHNSON SYNDROME (SJS) News
"And I had lots of support; my friends and family were with me 24/7. When I understood that Ibuprofen was the cause of SJS, I couldn't believe it. Oh my god, how on earth could a common medication have such a horrific side affect that could kill? To this day I still see an eye specialist and I haven't taken any other meds except for Tylenol. There was one incident where I needed to take a cold medication—my doctor said I could—but I was even leery of that. I pray that I will never have to take an antibiotic for the rest of my life and wind up with SJS all over again.

"As for SJS being rare, just as I was leaving the hospital a woman was admitted—they moved me out of my room and moved her in. She was completely wrapped in plastic and the nurse said that she also had SJS. The nurses also told me that 10 years ago they hardly ever saw SJS cases but it is becoming more and more frequent...and I'm lucky to be alive."
READ ABOUT STEVENS JOHNSON SYNDROME (SJS) LAWSUITS