Allergy and Asthma Sufferers Experiencing Some Suicidal Feelings from Singulair

Until recently Singulair was viewed as the saving grace for allergy and asthma sufferers everywhere. But, recently the Food and Drug Administration (FDA) is looking into making further investigations into the once heralded allergy and asthma drug. The new research into Singulair's side effects comes on the heels of some people taking the drug and realizing that they were experiencing suicidal thoughts and feelings.

Not every person that takes Singulair has experienced the suicidal episodes, but caution is suggested. Right now the cause of the suicidal thoughts is virtually unknown and the FDA is requiring all doctors to closely watch patients that are still taking the drug. It's recommended that nobody cease taking Singular without talking to a physician first. 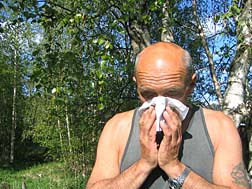 Singulair is a part of a family of medications called the leukotriene-modifying medicines, and it has yet to be determined if the other medications produce the same suicidal effects. So far the case studies filtering into the FDA are only concerning cases of suicidal effects from Singulair. Further studies are planned to investigate the allergy and asthma medicine more closely to yield a complete picture of the drug.

This is disappointing to some patients since at first the drug seemed to help them contend with their allergy and asthma symptoms. Some people are only taking the medication to alleviate the symptoms of seasonal allergies. However, other people take the drug because they have more severe allergies or even asthma they are using it to treat. But, over the course of time the drug has shown adverse consequences with the suicidal thoughts it induces in some portions of the population using the drug. Until the further studies come to a conclusion it's anyone's guess as to why the drug is causing this type of a reaction in patients.

More News
This isn't the first drug to cause mental episodes of suicidal thoughts and feelings. Chantix the smoking cessation drug has been known to cause these kinds of feelings. There have been documented cases of Chantix causing death in patients using the drug. Singulair doesn't have any documented cases of anyone committing suicide from the drug at this time. The suicidal effects have just involved thoughts and feelings and not the actual act of suicide. However, if someone is already suffering from depression this needs to be taken seriously.

Until recently the most common side effects Singulair boasted was sleepiness. Merck who produces Singulair has had complications with other medicines in the past. The best thing anyone taking the medication can do is to closely monitor their body and its reactions. A person knows their own body even better than a doctor, and can tell if there are any slight nuances in change. Medical experts are recommending that if a person is taking Singulair and experiences even slight changes they need to contact their physician right away. Don't wait until symptoms become more dangerous especially since this is still under investigation.