The Republic of China has now caught on to the pre-existing concern over simvastatin when combined with amiodarone, given a release in November by the State Food and Drug Administration (SFDA) in China warning about the risk of rhabdomyolysis, a rare muscle injury that can lead to kidney failure and death. Simvastatin taken alone in high doses, or taken together with amiodarone, can cause grievous health issues. 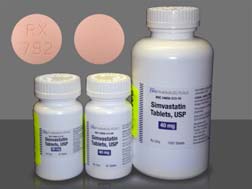 This is old news to Americans. The US Food and Drug Administration (FDA) issued a warning in August 2008, with an update in March of this year concerning simvastatin and the potential for amiodarone interaction.

According to the FDA:

"Prescribers should be aware of the increased risk of rhabdomyolysis when simvastatin is prescribed with amiodarone, and they should avoid doses of simvastatin greater than 20 mg per day in patients taking amiodarone."

The China health authority is basically flogging that same warning, according to China Business Newswire November 17. The SFDA received 1,447 reports of adverse reactions over a 17-month period from January 1, 2009 to May 31 of this year, and thus is recommending doctors not prescribe more than 20 mg of simvastatin per day for patients taking amiodarone, and ordered drug makers to improve health warnings on the product's labels.

More AMIODARONE AND SIMVASTATIN News
Despite the fact that the FDA appeared to be ahead of China's SFDA on this, it appears that the US advocacy group Public Citizen was way ahead of them both, given the inclusion of amiodarone in its September, 1995 newsletter warning of risk without benefit, with regard to amiodarone.

The FDA Medwatch office reported in excess of 3,900 adverse events and 452 deaths in relation to amiodarone starting in November 1997 through to October 2002 over a five-year period. However, Public Citizen's alert with regard to amiodarone was a full two years ahead of even that.

Amiodarone was approved in 1985 by the FDA in spite of misgivings by the agency over initial reports of serious pulmonary side effects. The subsequent combination of amiodarone and simvastatin only adds to that concern.