Amiodarone: Father Went into Hospital and Never Came Out

When Robert R. was put on amiodarone, his family thought the drug was necessary to treat his condition. They did not realize that, because of amiodarone side effects, the US Food and Drug Administration (FDA) had only approved amiodarone as a drug of last resort. Furthermore, they did not realize that the drug could result in amiodarone lung toxicity and was only approved for patients with life-threatening ventricular arrhythmia, which Robert did not have. 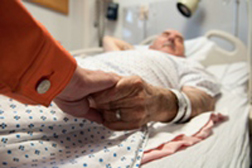 As a result, Robert's family has filed a medical malpractice lawsuit against the prescribing doctor, alleging wrongful death. The basis of the lawsuit is that Robert should not have been put on amiodarone because he did not have ventricular fibrillation—for which the drug is approved—and because the prescribing doctor did not attempt to put Robert on other medications before prescribing the amiodarone. Following her father's death, Diane has researched amiodarone extensively and wants to get information about this drug out to the public.

In May 2005, the FDA sent out an alert about amiodarone, warning that the drug could cause fatal pulmonary toxicity (lung toxicity), hepatic injury and worsened arrhythmia. The FDA further warned that amiodarone should only be used to treat adults with life-threatening ventricular arrhythmias when other treatments have not worked or cannot be tolerated (fda.gov). In making the announcement, the FDA cited studies that found pulmonary toxicity rates as high as 17 percent in some patients. According to the FDA, pulmonary toxicity is fatal 10 percent of the time.

"The doctor used amiodarone to treat atrial fibrillation in my father, which is an off-label use of the drug according to the FDA," Diane says. "There are a few amiodarone side effects, including thyroid problems and liver problems, but the most serious consequence is the lung damage [lung toxicity, also known as pulmonary toxicity], which is what killed my father.

"My father didn't even have a bad atrial fibrillation. He'd only had two episodes and they were both paroxysmal, meaning they stopped on their own. He didn't require medical intervention to stop the episodes. So, amiodarone was a serious drug for him to be put on to start with.

"After that, it was a calamity of errors. The doctor prescribed the amiodarone, which was an error, at the same time he was given a pacemaker. He recommended my father have bypass surgery. We found out about robotic bypass, which was less harmful than other bypass because they don't break the sternum and there is a shorter recovery time. So, we researched robotic surgeons and my father wound up going to the second-most experienced robotic surgeon in the US.

More AMIODARONE AND SIMVASTATIN News
"When my father had the surgery, he still had amiodarone in his system. That triggered fibrosis, which led to lung toxicity. Within 48 hours of the surgery, he had fibrosis. Seven weeks after the surgery he passed away, suffering tremendously because he couldn't breathe.

"How could this happen? He was chopping wood a week before the pacemaker was put in [the same time the amiodarone was prescribed]. He was healthy. The surgery was voluntary, it wasn't mandated. We could have put it off because he didn't need it immediately. If he hadn't had the surgery, he wouldn't have died. I don't think the doctor knew about the half-life of the amiodarone. We asked the doctor about the risks prior to the surgery, but all he said was, 'There are always some risks'.

Posted by
Lorene Roccon
on June 6, 2017
My father was 88 years old when a new heart DR prescribed Aminodrone. He knew my father had experienced bleeding from his eyes and had been taking warfarin for years. Without reducing his warfarin, he put him on a large dose of Aminodrone. With in two weeks my father was rushed to the hospital vomiting blood. His lungs were destroyed. Even then the Drs at the hospital continued with the
Aminodrone until a nurse pointed out to us that the drug was causing the damage. When we questioned his Drs, they agreed that the drug should be discontinued but the damage was done. He dided the next week from massive pulmonary failure.
Posted by
Marie McLean
on February 25, 2017
There exists a surprising lack of concern among many doctors who prescribe amiodorone to offer any other treatments for heart conditions. It seems that they only know one drug--amiodorone--and prescribe it quite freely without even mentioning the severe side effects. It is essentially offering a death sentence to the patient, who has the unenviable choice of dying of being poisoned or of some failure of the heart. I realize heart problems may be difficult to treat; but other options are available--at leastfor Afib--that are not poisonous. I would think that at least some doctors would make patients aware of those options and give them the choice of what medication they want to take. Many doctors may not agree but studies have indicated that acupuncture might be just as effective as amiodorone in treating certain heart conditions. And at least acupuncture doesn't kill the patient.
Posted by
Chris D.
on September 26, 2016
My Father-in-law (80 yr. old.) passed last night from Lung Toxicity from Amiodorone. The doctors thought he had pneumonia about 2 weeks after by pass surgery and it didn't occur to them it was the Amiodorone until it was too later. Which puzzles me since they prescribed it they should be aware of the risks? No one warned us or my father-in-law. He had a very strong heart but because of Amiodorone, in the end that is all he had; his lungs were destroyed. Something is wrong here...
Posted by
Darren Lindsey
on April 2, 2016
Ive had alot of breathing problems since being prescribed Amiodorone200!! Being hospitalized about every 3 months for severe shortness of breath, and fluid retention! I have CHF, and have a defibrillater!
Posted by
Mark Smith
on November 12, 2015
My father just past away Oct 31 ,2015 because of lung failure due to Amiodorone .
Posted by
Carol McVay
on March 31, 2013
Just wanted to add briefly my experience on Amiodorone. In 2001 I had a pacemaker implanted @61 for Atrial Fibrillation. Started with pvc's, graduated to tachycardia then to atrial fib. I was prescribed by my Cardiologist, Aminodorone. I had moved to another town and the Cardiologist made a remark that I'll never forget: "Amiodorone is a dangerous drug", but continued to prescribe it for me. In 2006, there came a day that I was short of breath, thought perhaps it was allergy related and asked my husband to drive me 30 miles to the nearest emergency facility. They decided it was a good idea to keep me over night and provide respiratory treatments. That frankly is all I recall. My husband tells me that the next am when he came to take me home, I told him I wasn't feeling well and at that time, I "coded", cardiac and respiratory arrest. If he hadn't been in the room to witness this, I would have died as the hospital did not place me in a room with a cardiac monitor. I was placed in ICU on a ventilator.
I was in the hospital for some time and then transferred to a extended care/rehab facility where I stayed for quite awhile. That was not the best experience. I believe I may have had a stroke when I arrested and couldn't walk as I had little strength in my legs. Today, I need a cane for support. My husband was told by an attorney that I would have had a case if I had died. Just wanted to advise any and all that most likely it was the AMIODORONE.