Seroquel Side Effects for the Elderly

Seroquel is a neuroleptic indicated for the treatment of bipolar disorder—and like most drugs carries a host of Seroquel side effects, including diabetes, tardive dyskinesia and even birth defects. However, there is a little-known use for Seroquel off-label that concerned the daughter of one Alzheimer's patient for whom she was caring. 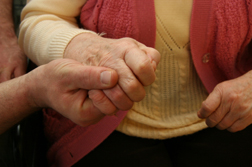 Carol Wright was recently named Family Caregiver of the Month by The Caregiver's Voice, a publication dedicated to the family and professional caregiver industry. Wright, at the age of 54, decided to devote herself full time to the care of her mother in the final few months of her life.

That was almost nine years ago—and in that time Wright's journey, and that of her mother, has crossed paths with Seroquel.

Dr. Raul Grosz, a board-certified neurologist with Neuroscience Consultants of Aventura and Miami Beach, Florida, notes in a YouTube video that "Seroquel carries a black box warning from the [US Food and Drug Administration} stating that it increases the risk of mortality and death in the use of patients with Alzheimer type dementias [Grosz is not Wright's doctor].

"This puts us in real a quandary. It is a real dilemma for us as physicians since this group of medications that Seroquel is in called neuroleptic or anti-psychotics can be very useful in controlling some of the psychosis and some of the behaviors that can be seen with this type of condition."

Wright, in a guest column penned for the December 5 issue of The Moderate Voice, relates the time when her mother was subjected to a battery of tests for unexplained nausea. While in the hospital, Wright explains, her elderly mother had the occasional episode of puzzlement and delusional confusion, and at times became somewhat combative as she tried to ward off "prodding, hurtful hands."

Her doctors put the elderly woman on Seroquel.

Within two months, Wright reports, "my mother slumped to [the] side [of] her chair so much I had to tie her in to keep her from falling. I stood guard so she wouldn't be hurt while she thrashed in bed, now padded everywhere. Sometimes she stiffened, slid from her chair like a '2 x 6' board. Now on the floor, face contorted, tongue choking. Eyes rolling."

That's when she saw an ad on television noting that Seroquel should not be used in elderly patients. "I see Mom on floor. I research online. So many of the bad side effects she has. Her doctors have made my mother straightjacket insane. We stop the Seroquel.…"

More SEROQUEL News
Wright didn't say if her mother's doctor mentioned the potential concern for Seroquel side effects—especially as they relate to elderly dementia and Alzheimer's patients—but given Wright's apparent surprise at the TV ad, she may not have fully understood, or been informed of the implications—including the potential for Seroquel tardive dyskinesia.

Various other adverse reactions, including Seroquel hyperglycemia are, of course, a concern. But equally worrisome, given the aging of the American population, is the need for appropriate—and safe—medications to treat Alzheimer's patients. Doctors are well aware of the risks associated with Seroquel for the elderly. And yet given the lack of drugs available and a doctor's legal capacity to prescribe drugs for indications beyond those approved by the FDA, boundaries will be pushed. Dr. Grosz notes that more research needs to happen, to afford doctors more options that are safer for the patient. For Carol Wright, however, her preference on behalf of her mother—where possible—is to go drug-free.

Posted by
Phyllis Hall
on February 28, 2015
I have tardive dyskinesia which is progressing terrible involuntary movements and muscle spasms. The neck tongue jaw face eyes nose mouth limbs fingers every part of my body is affected by this.I have been on Seroquel before for a long time I am schizoaffective. I need help in suing this company for distributing and pushing the doctors to sell or prescribe this medicine which has been proven already. The side effects are of enormous pain and disability for myself. I also am experiencing total short term memory loss and speech problems. Now my doctor has me on Zyprexa! Go figure! Please contact me as soon as possible in regards to this situation I have lost 40 pounds in 5 months due to the constant working out of my body.
I only 101 pounds.
My muscle spasms have led me to a point where I am working out continuously from my torso always moving I have no Ounce of body fat on my body.
please contact me at 281 690 9062. Or my email address is:
bniceorelse@gmail.com
my friend and caretaker Robin walls is filling out this form for me because I can not. Thank you for your time and concern please reply asap thank you

They called it the *Five at Five* (5 mg at 5 pm to keep nursing home patients subdued and sleepy) and *VIVA ZYPREXA* (Zyprexa for everybody) campaigns to off label market Eli Lilly Zyprexa as a fix for unapproved usage.
A New York Times report reviews what has been accomplished by multiple civil
and criminal lawsuits against Big Pharma companies that have relied on fraud
to market industry's worst pharmaceuticals--antipsychotic drugs--which have
become industry's most profitable cash cow.
"The new generation of antipsychotics has also become the single biggest
target of the False Claims Act, a federal law once largely aimed at fraud
among military contractors. Hundreds of millions of
dollars or is currently under investigation for possible health care fraud."
Only 9 percent of adult Americans think the pharmaceutical industry can be trusted right around the same rating as big tobacco. No Wonder!
---
Daniel Haszard Zyprexa victim activist
zyprexa-victims.com