In yet another big announcement from Wall Street, Bank of America said on Monday that it will buy Merrill Lynch for $50 billion in stock. That works out to $29 a share in stock, which is 70 percent more than what Merrill Lynch stock closed at on Friday, September 12.

Merrill Lynch was crippled by perilous real estate deals and wound up with inadequate capital to cover its losses. The firm had $52.2 billion in losses and writedowns related to subprime securities and its stock fell more than 80 percent from its $97.53 peak. In July, Merrill Lynch sold more than $30 billion in collateralized debt obligations (CDOs) for just 22 cents for each dollar. 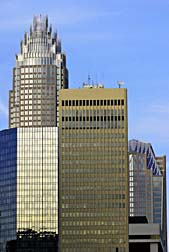 According to reports, the deal will combine Merrill Lynch's 17,000 brokers with Bank of America's wealth advisors. The new brokerage will be called Merrill Lynch Wealth Management. After the announcement of the buyout, shares in Merrill Lynch soared to $21.85.

More STOCK MARKET News
Earlier this year, Bank of America purchased Countrywide Financial for $2.4 billion in stock. The purchase of Merrill Lynch makes Bank of America the biggest brokerage house in the US, with $2.5 trillion in client assets. The deal has been approved by the directors of both Bank of America and Merrill Lynch and is now subject to shareholder and regulatory approvals.

This weekend saw the meltdown of at least three financial services companies, including Merrill Lynch, Lehman Brothers (which is now filing for bankruptcy) and AIG (which has now been permitted to loan itself money). Additionally, Fannie Mae and Freddie Mac were recently bailed out by a government takeover. All this news has investors understandably concerned about the investment industry. Although experts are telling investors in Merrill Lynch that there is nothing to worry about, the news this weekend has been unsettling, to say the least.