"Just a day after my daughter Carla had a salad at school and tomatoes with dinner that night, she complained of a sore stomach and a headache," says Judy. The next few months were a nightmare, two weeks of which Carla spent in the intensive care unit. Nobody suspected she could have suffered from tomato salmonella. 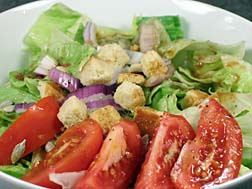 "Carla is a special needs child and she has a high pain tolerance," says Judy (not her real name pending a lawsuit), "and she doesn't have the ability to throw up or complain of pain." Carla has Prader-Willi syndrome, a genetic disorder that is often mistaken for Down's syndrome. "I woke her for school but she didn't want to go and spent a long time in the bathroom: I thought she was probably constipated but in retrospect, she likely had diarrhea," says Judy.

"Then she told me that she felt sick. I took her to hospital and they did blood and urine tests," she says. "I knew something was wrong because her urine was black—it looked like oil. They did all types of tests, from 10 in the morning until 8pm that night. Around 5pm they told me that she was going to be admitted but had to be transferred to Children's hospital.

By the time the paramedics got her there and she was lying in the hallway on a gurney, I took one look at her and knew she was in trouble. I finally convinced them to put her in a room and they were still trying to draw more blood—her veins were collapsing. This was close to 11pm—what a long day for Carla. The room was filled with nurses and doctors and I heard everything from gallstone to liver problems to gallbladder. As they were trying to figure out what was going on, she was rushed to ICU and placed on life support.

'If we can get her through the next four or five hours, she would be out of the woods,' a doctor told me. But they still didn't have a diagnosis. All they could tell me was that her red blood cells were attacking themselves and her hemoglobin count was 1.5. It should have been 12-13. I didn't know what to think; Carla had never been sick like this.

I kept asking them if it could have been something she ate because she kept complaining about her stomach. They didn't think so because of her blood count. She stayed on life support for about five days and stayed in ICU for 10 days. She was given seven units of blood and two plasma treatments, along with all kinds of meds.

The whole time she was in hospital, Carla had severe diarrhea. And she wasn't eating. They said it could be an allergic reaction to the antibiotics. Finally they got a stool sample—it took until May 20th and she was admitted on the 8th--but it didn't show anything. By that time, nothing would show up except the antibiotics. We didn't leave the hospital until June 2nd but she had to go to rehab and learn to use her muscles all over again.

When we got home, I made dinner that included a salad with tomatoes. When I put the bowl in front of her, she picked the tomatoes out and said 'I don't want them.' For some strange reason, Carla refuses to eat tomatoes. She has no idea about the tomato salmonella outbreak—she is a special needs child and is incapable of comprehending this issue. Why has she decided not to eat tomatoes? She has no limit as to what she will not eat—a side effect of Prader-Willi syndrome. In other words, she eats everything that is put in front of her.

More TOMATO SALMONELLA News
She is very inquisitive. If I tell her about the outbreak, the questions will be never-ending: she will keep on and on, asking why I gave her something that would hurt her. Too many questions that I am not prepared to answer.

I believe that her refusal to eat tomatoes is because she knows they made her sick. Why wasn't she tested sooner, why didn't she have a stool sample right away? I guess we will never be able to prove it."