Imagine taking your regular prescription for ETHEX corporation drugs and waking up in the hospital, only to be told that you had purposely suffered an ETHEX overdose. Imagine the shock and fear when you are told that you will have to stay in the hospital for observation because you could be a danger to yourself. Imagine trying to survive the ETHEX side effects while trying to figure out how you could possibly have followed your prescription properly only to suffer an overdose. 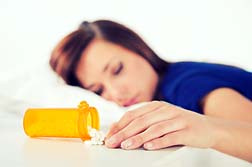 Grace M. does not have to imagine that scenario. She says she lived it.

"I had gotten a prescription for 15 mg morphine drugs, and those were the immediate release medications," Grace says. "I took those for a month and they were fine. Then, I got the prescription refilled on the seventh [of October] and by the ninth [of October] I was having breathing difficulties. My husband called the ambulance and had me taken to the emergency room.

"I was completely out of it—I didn't know what was going on. I think it was a Thursday and I was out of it until Saturday. Everyone thought I had tried to overdose on medication. They kept me in hospital for 3 days and then I was sent to another hospital. I was Baker Acted [a law in Florida that allows a person to be involuntarily examined for up to 72 hours at the initiation a professional, such as a medical professional, provided there is evidence that the person has a mental illness and could cause harm to herself or another person].

"I stayed in the hospital 3 more days and was then sent to another hospital for a few more days.

"About a month after I got home, I got a letter from the pharmacy that there was a recall on that particular batch of pills. I called the pharmacist that I normally go to [where she received the first prescription]. He said that my medication wasn't recalled, but I think he was just referring to the first batch. I had taken the refill to a pharmacy down the street and they said that I got bad pills. They said that the pills were too large and I could have been getting more than twice as much medication as I should have had.

"I lost 2 weeks; my life was upside down. People were doubting me, thinking I was trying to hurt myself and I couldn't explain what was going on. I had no idea what was going on. I just knew I was taken to the emergency room in the middle of the night and I was babbling for days. Then, I came out of that with people thinking I tried to overdose and finally I found out that it was because of bad medicine.

"I was really out of it. I was talking to people that weren't there, I didn't know my own family or my husband and I couldn't put a sentence together. And people just said, 'All you took were these pills, what else could it be?' They thought it was on purpose. It was the pills, but it wasn't me.

More ETHEX News
"From what I've read they [ETHEX] have had quite a bit of medication recalled. People who need pain medication might not be able to get it. I took pain medication for Fibromyalgia—that's what it was for. I can't get it in generic anymore. Even my doctor said that there are no generics available. People have to buy the brand name morphine now. It's negligence as far as I'm concerned.

"They were giving people bad medicine. And, you don't know—you just have people telling you that you must have tried to overdose, but I wouldn't have. There was no reason for me to. I'm glad I got the letter from the pharmacy, because I never would have known and I always would have wondered what happened to me.

"I'm scared when I have to take a new prescription now. There are long-term psychological effects, certainly. To be stuck in a hospital, not knowing who you are or why you're there and having people doubt you, you never get over it. I lived through it, but there will always be that anxiety and pain and wondering why I went through that."