"I would like to say to the manufacturers of Requip that in this economy, it is hard enough to make a living and keep a roof over your head without having drug-induced panic and terror inflicted on your life," says Laura. " Requip gambling almost ended my life." 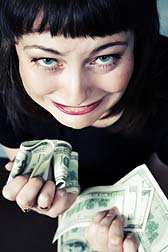 Laura's husband and family loved to gamble but it was too nerve-wracking for Laura: even if she put $20 in a slot machine she would shake and worry about losing that money. But Requip came along and that soon changed…

"About four years ago my doctor prescribed Requip for restless leg syndrome and it helped for a few months," says Laura. " All of a sudden I got an urge to visit the casinos and I actually won a small jackpot—like it was pre-ordained. After that, it was like a switch was turned on in my brain and all I wanted to do was gamble.

I spent everything I could get my hands on; I lost my condo and my life savings, even as my paychecks came in I would cash them and rush to the casino; spend all night there and go back to work the next day without sleeping. Requip gets you wired; it affected my reasoning ability, my memory.

Before I started gambling I had a 780 credit score; that is very high and now it's down to 400. I am divorced and lived on a school staff salary of $20,000 per year and I lost it all--I had to claim bankruptcy.

In the meantime I got remarried and moved out of state. We got engaged and broke up because of the gambling but I lied to him and said I quit so we tied the knot. Even then, I was gambling online; he didn't suspect because I had my own laptop. It didn't bother me at all that I was deceiving him; I was gonna hit the big time one of these days and then I would quit—that's what I told myself. Of course that doesn't happen in real life. I kept spiraling downward and finally he divorced me and while I was out of state at my father's funeral he moved my stuff into storage and left me homeless.

I had nowhere to go so I left my job and moved in with my elderly mother in another city. I was still gambling; of course I had no idea that Requip was causing this compulsive behavior. Here is the worst part: I had claimed bankruptcy and with no income of my own, I used my mother's credit card. I told her, after I had plowed through $37,000 on her card.

One day as my cousin was cutting my hair, I was watching TV and a commercial came on the screen about Requip and its side effects, namely gambling.

I couldn't believe what I was hearing! I finally had an answer. I was mad as hell yet relieved at the same time because maybe I'm not this horrible monster that I became; maybe it is all drug-induced. I called my doctor right away; she had no clue about the Requip compulsive behavior side effects (although she wasn't the prescribing doctor—I'm living in another city now). She advised me to withdraw gradually, which I did, but it took almost a year. And during that year, I still had the desire to gamble but I didn't have a dime to my name, or anyone else's for that matter.

More REQUIP News
I finally stopped taking Requip completely just one month ago. And surprise, surprise, my gambling compulsion stopped. I don't even think about it now. But what I do think about is getting involved in a lawsuit against Requip to recoup some of my losses, to repay the financial damage I caused. The emotional damage is irreparable.

Thank God I have forgiving and understanding friends; not one of them doubted me when I explained that the gambling was drug-induced.

The makers of Requip have to realize that life isn't always about money and putting profits over the safety of their consumers. There has been harm done by this drug, so do something about it—get it off the market or at the very least, make everyone aware of these horrific side effects; don't just write it in fine print on a piece of paper stuck in the box or at the end of a Requip commercial when the side effects are read so fast you can't understand a word.

At this point, for thousands of Requip users and losers it is too late. But it isn't too late to file a lawsuit.