Reglan not Approved for Infant Use

It is not uncommon for newborns to experience Gastroesophageal Reflux Disease (GERD), and when they do, they are frequently treated with Reglan. However, Reglan side effects in infants are still not well understood. Many parents who say they were unaware of the link between Reglan and tardive dyskinesia are now concerned that their children will suffer from the effects of Reglan all their lives. 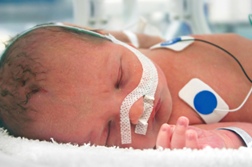 Babies, especially premature infants, are sometimes born with underdeveloped gastrointestinal tracts. In such cases, the lower esophageal sphincter does not stop stomach contents from moving back into the esophagus, causing vomiting, coughing, gas and heartburn in infants. To treat the problem, medical staff often give infants Reglan.

However, the side effects of Reglan on infants are not fully understood. In adults, Reglan can cause tardive dyskinesia, a movement disorder characterized by repetitive, purposeless movements including facial tics, grimacing, tongue protrusion and uncontrolled movement of the limbs. There is currently no cure for the disorder. Adults have reported that the condition is embarrassing and causes them to avoid social situations. Even simple day-to-day tasks—holding a glass, writing a note, brushing teeth—become almost impossible when a person suffers from involuntary shaking or twitching.

It is more difficult to tell if an infant's movements are natural or are a reaction to a medication. If the latter, the infant could face a lifetime with tardive dyskinesia. For children, that trauma can be devastating.

More REGLAN News
In 2009, the US Food and Drug Administration (FDA) required the maker of Reglan to include a black box warning on the label, alerting patients to the risk of tardive dyskinesia and recommending that the drug be used for no longer than three months. The longer a patient takes Reglan, the greater the likelihood that he or she will develop tardive dyskinesia.

The labeling information for Reglan currently states: "The pharmacodynamics of metoclopramide [Reglan] following oral and intravenous administration are highly variable and a concentration-effect relationship has not been established." This means that there is no certainty as to how the concentration of Reglan affects patients.

The label also notes that there is not enough reliable data to determine whether Reglan affects infants in the same way that it affects adults.

Reglan is approved for use only in adults.