Alert To Pregnant Women and Nursing Mothers Taking Reglan: You Could Be at Risk of Developing Irreversible Neurological Damage.

Reglan is not FDA-approved for morning sickness, yet the acid reflux drug, also known as metoclopramide, is being prescribed off-label to treat nausea and vomiting in pregnant women as well as to increase milk production in nursing mothers. 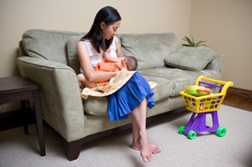 Metoclopramide has been recommended to nursing mothers for over 20 years, yet Reglan's label states that Reglan can pass into breast milk and harm the baby.

Metoclopramide has been linked to tardive dyskinesia, a disabling and often permanent condition characterized by involuntary and repetitive movements. Symptoms of tardive dyskinesia include involuntary/repetitive movements of the extremities, lip smacking, grimacing, rapid eye movements or blinking and impaired movement of the fingers. There is no known treatment for this condition, which can last a lifetime, affecting victims physically, mentally, emotionally, socially and vocationally.

The FDA issued its toughest "black box" warning against metoclopramide on February 26, 2009. The warning enhanced the prescription labeling by adding stronger language about the risk of tardive dyskinesia, advising consumers that "the risk of developing tardive dyskinesia increases with duration of treatment and total cumulative dose."

Reglan injury lawyer Roger D. Drake added, "It also warns that treatment longer than 12 weeks significantly increases this risk. The black box warning, however, fails to mention that metoclopramide can cause this condition even with short term use, although the risk grows with long term use."

More REGLAN News
Three months after the black box warning was issued, an article printed in the New England Journal of Medicine claimed that metoclopramide was safe for use by pregnant women. Not once did the article mention the black box warning or the risk of tardive dyskinesia. "Women need to be aware of the potential risk Reglan poses to themselves and their children," said Mr. Drake.

The FDA has only approved metoclopramide tablets for the treatment of gastroesophageal reflux disease (GERD) and diabetic gastroparesis. The injectable solution of metoclopramide has been approved for the treatment of nausea and vomiting associated with cancer chemotherapy and to prevent the nausea or vomiting that may occur after surgery. It is only approved for short-term use.

Anyone suffering tardive dyskinesia symptoms after taking Reglan should contact their doctor and also a Reglan injury lawyer to seek compensation for their injuries.