Anyone who has suffered reported Reglan side effects can tell you that those side effects can be debilitating. A link has reportedly been found between Reglan and tardive dyskinesia, which causes involuntarily movement of the patient's muscles, including the jaw, face and tongue. Jennifer M. says she does not have proof that she is suffering from Reglan tardive dyskinesia, but doctors have ruled out just about everything else. 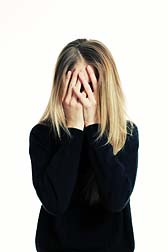 Jennifer says she has been on Reglan for years now, for acid reflux and because of an incident in which her colon burst and she lost half of her stomach. She was given Reglan every time she went into the hospital, which wound up being frequently because the mesh used to patch up her abdominal area repeatedly failed.

"Usually, I just have Reglan when I go in hospital," Jennifer says. "The last surgery I had was in March. I have surgery every 3 to 4 months because I don't have a stomach, I have a mesh and it breaks a lot. Doctors have to keep the acid down, so they give me Reglan.

I have had motor skill problems, problems with my mouth and tongue, I've broken the teeth out of my mouth from involuntary action and my hands and feet draw up. I heard about this [Reglan side effects] and thought maybe this is what's going on with me, but they [doctors] can't tell me. The doctor won't give me Reglan anymore, but I don't know what he'll substitute for it. In the meantime, I guess there's no definite proof that's what is wrong with me.

When I was first out of the hospital [following 8 months in the hospital, during which she was given Reglan], I noticed things like a wagging tongue and involuntarily moving my jaw. My teeth started chipping—bits and pieces of them fell out of my mouth. Doctors didn't know what was causing it. I had to go back into the hospital [for abdominal problems] and then it was just one surgery after another to keep me intact.

Now, I also have problems with breathing. I had to go to a sleep clinic and they told me I stopped breathing 36 times in 1 hour and had trouble swallowing. They told me that I needed to have a mask on at night but I said that I can't. So, I sleep with a fan directly in my face for air movement. It seems to help, but I wake up all night long. I've never had that problem before.

I was shocked to hear about Reglan. I was on it for years and I never knew that you should be on it for only a short time.

I don't remember having these motor skill problems before this. My husband said my tongue didn't dart in and out of my mouth and my mouth didn't move like this [a pursing motion]. In public, I put my hand over my mouth—it's embarrassing and I can't control the movement. My teeth are gone. I had 2 implants but because of the movement I break every one of them. I was back at the dentist this morning for a new set. It's hard to eat—it was hard anyway, but now I can't chew so I have liquid protein.

I went to a neurologist and he didn't know what to do with me. I am regularly checked [by doctors]. I've been monitored for everything [including a stroke and arthritis] and they've ruled out about everything. So maybe it is Reglan but who will tell me? If my doctor didn't know, who will tell me?

More REGLAN News
I have to restrict going out in public, mostly by choice, because it bothers me a lot. I don't look like myself. I'm very tired of it—I don't understand why I'm like this and why it happened and I don't know what to do. I don't know how to control the facial movement. At one point, the doctor said I had a stroke, but I didn't pass the stroke test. It is just muscle drawing up on one side of my face and mouth. I don't have arthritis. How many things can you rule out and what can you be left with? I guess there's no test for the side effects from Reglan.

I had to learn to write again because I had no control over my hands. My left foot goes to sweep and draws up but they [doctors] classify it as motor skill problems. They don't know why it happens.

There's probably nothing they can do. I have pain when my hands draw up and sometimes my face will hurt from movement. My toes draw up—it's like a bad charley horse and I sometimes hit it to get it to loosen up. It's just frustrating. My life has drastically changed. I feel bad for my husband. This is not what our golden years were supposed to be."