Ron suffers from a rare condition called cyclic vomiting syndrome and was given Reglan for the past 10 years, until he developed symptoms similar to Parkinson's disease. Only recently did he connect the dots—his neurologist diagnosed Tardive Dyskinesia as a result of Reglan and other stomach drugs. 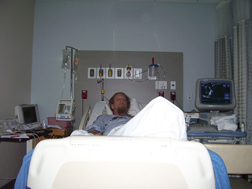 "The tardive dyskinesia [TD] didn't happen overnight," says Ron. "I was undiagnosed for many years, mainly because I don't have health insurance. When my cyclic vomiting condition got really bad, I would go to the ER where they would re-hydrate me, hook up an IV with Reglan and send me home with sample drugs—mainly Reglan—because I couldn't afford prescription drugs.

"Some time ago I had a pain in my shoulder so I went to my family doctor. He noticed my legs shaking; I just thought it was restless leg syndrome. But he did some tests and told me that I had something more going on than that, so he sent me to a neurologist.

"That is when I was diagnosed with TD. They did a lot of tests and they even have a lot of pictures of me because I had such an aggressive case. The neurologist said that I was a 'real challenge' because they had never seen it so bad. At this point, they didn't know what had caused it.

"My wife and I started looking back at my medical history. We couldn't understand why I was shaking, like I had Parkinson's disease. We soon found out: After getting my medical history from my gastrologist—who I see for my vomiting syndrome—my neurologist told me that this was drug induced. It just blew our minds that it was caused by Reglan, a med I was taking for all these years.

"Tardive dyskinesia is a progressive disease, meaning that I am not going to get better. Eventually it will grow into full-blown Parkinson's disease. My neurologist calls it 'Parkin-isms' or 'pre-Parkinson's.'

"I used to be a musician and an artist; in fact my neurologist has some of my paintings on her office walls. But I can't play music or paint any more; in fact I can hardly drive. Now I am disabled and on social security. I can't work or do anything I used to do. And I just received 17 botox injections in the back of my leg to make my toes uncurl, caused by the tardive dyskinesia. I see a neurologist every six weeks and I'm going to physical therapy, but I'm only covered for 12 sessions.

More REGLAN News
"Today I have an appointment at the clinic. They are going to implant a pump into my spine that will deliver a muscle-relaxant medication. It doesn't work if taken orally so they are injecting it directly into the spine. They are going to experiment on me a bit this afternoon and see what levels of spasticity I can tolerate.

"If I had a chance to sit down with the makers of Reglan, all they would have to do is look at me to see the damage their drug has done. I can't sit or stand for more than a few seconds, my speech is slurred. Nobody said anything to me, at any time, about Reglan side effects, except when my neurologist told me. What's worse is that I am on low income and my insurance company will only cover certain drugs. My insurance company won't pay for the drugs that are helping me, but they will pay for Reglan, which has done all the damage. Go figure!

"My specialist tells me that I have to take a certain drug, but they deny me. It's like one hand doesn't know what the other is doing. And my hands are shaking."

Posted by
Ajay Lack
on July 10, 2015
I have TD from taking metroclopramide (reglan/maxolon) for gastroparesis. I was never warned of the danger. Now I am stuck with this awful condition.Clonazepam & Valium help to control the movements.Please feel free to contact me. The more people we can alert to the awful effects of this drug the better.
Regards
Ajay

Posted by
G. Shaylor
on August 28, 2013
Man, do I feel for you. I have had similar experiences. I have always worsening TD also that has be unable to work, function without ridicule, and without being labeled a "security risk" at stores etc. My speech also suffers, however my TD is mostly facial. I look like I am catching flies most of the time, eyes roll back, mouth torx to one side. Emotionally I can so relate, my friend. My tourette's has never been severe and I could function normally in society with little evidence of my disease. TD on the other hand has left me frustrated, angered, and emotionally and physically spent every day. I and my family will be praying for some kind of relief for you. Hang in there. Your story, just by getting it out there, is awesome. You have blessed me with your story already.