Despite her experience as an investor, Susie has suffered over $40,000 in damages through unfair real estate practices with the Marshall Reddick Network and damages continue to mount daily. "I had already been investing in real estate for five year," says Susie, "but I'd never invested outside my area where I can keep an eye on things. Still, I got sucked in by the Marshall Reddick network."

"I was living in California at the time. He was giving an adult education class at Saddleback College in Mission Viejo. In his seminars he repeats over and over that people will be able to retire as millionaires. He evens adds a spiritual flourish to it and since he's a retired professor from Long Beach College specializing in economics, you believe him. What he said made sense."

"When I got in at first there were maybe 100 members, now there's thousands. The network went from posting little ads and emails to this huge network. For example, at the beginning they'd send you to an outside organization for loans but now it's all concentrated in one place. The company seems so big and credible, you trust them. They've got newsletters, seminars, a wealth of information and online solicitations with great bargains. Of course, you won't get listings if you're not a member." 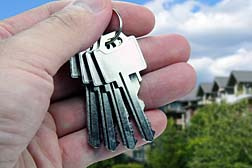 "I've never seen anything like it. On their brochures they say one thing but the truth is something else. He gets you to buy real estate sight unseen, putting down payments on properties but he doesn't care if you can afford the property as long as you buy into the network. He wins either way. I feel sorry for people who are not as aware as I am. People get themselves in but, in fact, they could do it themselves. I've made money on all my investments except the one with him.

Then he gets people like me ready to foreclose because all these investors are led to buy into one area, but the property managers do nothing while the investments go down the tube. Then he buys your foreclosure, taking it at a discount, and you're happy to be relieved of the property. He profits and takes your money on to the next."

"It makes me sick and irritated. There are hundreds of investors who suffered losses equal to mine in the North Fort Worth area alone. A Coldwell Banker agent, who knows the truth, told me they can't even sell in this area. It's a horrible area.

I finally found a good property management company and found a tenant. I was lucky to get someone for $1,000 a month."

Susie has since moved even further north but would like to "help put an end to the scam being run on trusting out-of-state real estate investors buying in the Fort Worth market, and perhaps well beyond this market."

Posted by
Harold
on May 15, 2012
I would like to hear more from Gordon. I am learning Alexis McGee's system, and would like to avoid being scamed. Please give more information about how you lost money with her program.
Posted by
gordon
on April 21, 2012
This one is as bad as Alexis McGee/Tahoe Weaton inc. They tell you the same thing. Even have their own website that lists all the forecloseurs, but none of their address match up. Told you can make $130,000 your first year. Most can't even make $20,000. I lost $5000.00 to them.