Since Tim found out he was given two steroid injections that have been linked to fungal meningitis his pain has escalated. His doctor refuses to give him spinal injections until they are certain that the Rare Meningitis Outbreak Steroid Injections he already received are dormant. “The CDC said it would take a month, then two months, and now it is months later,” says Tim. 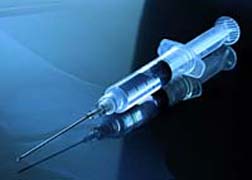 “It is like I am stuck between a rock and a hard place. I want to make sure that long term, if I got sick and was unable to work, someone should be held responsible. If a company is putting out a product that is injected into a human, they should be held accountable, financially and emotionally.

The meningitis outbreak is still ongoing. As of December 18, 2012, a total of 620 cases, which includes 39 deaths, have been reported in 19 states and the CDC issued an update to the multistate outbreak of fungal infections on December 20, 2012.

Even though it is highly unlikely that Tim has fungal meningitis, the fact that this investigation is ongoing is bad news for him.

Tim received two injections of the contaminated steroid--one in each hip--in August 2011. “I had severe pain after my back surgery and I was scheduled to receive another round of injections to relieve the pain,” says Tim, “but my doctor refused to give me any more spinal injections. He explained that I might have to wait up to a year to find out whether or not these contaminated injections have gone dormant in my body before they will do any more back injections to relieve the pain I am in. Meantime I sit hear waiting for who knows how long until they know?"

Tim is taking Vicodin but he says it barely skims the surface of his pain. Luckily he has a desk job, but this meningitis outbreak has totally affected his life. “I live in continual pain, day in and day out because I can’t get any more back injections,” he says. “I have five kids. My daughter is getting married in a few months but I can’t fly to the wedding and I can’t get in a car for more than a few hours. This has affected not only my life, but my family too."

Tim doesn’t hold his doctor responsible because he purchased the contaminated steroid thinking it was a safe product. “Dr. Jackson’s office called me in September when they found out that I had received two contaminated shots,” he adds. “By that time I already knew about the--supposedly--rare meningitis outbreak from the news. There were only three clinics in Michigan that had received the steroids and Michigan Neurological in Grand Blanc Michigan was one. It didn’t take a detective to figure that out.

More RARE MENINGITIS OUTBREAK News
"My doctor just looked at me and said there was no red streaking in my butt so I was safe. Nobody knows how long it stays in your system so that scares me. People are dying from one injection and I got two shots.”

Since October 2012, the CDC website has advised clinicians to closely monitor and evaluate patients who received injections of contaminated MPA from the New England Compounding Center. It also recommends that “clinicians should consider obtaining an MRI with contrast of the injection site in patients with persistent but baseline symptoms because the presentation of these spinal or paraspinal infections can be subtle and difficult to distinguish from a patient’s baseline chronic pain.”

The CDC has received 80 more cases (reported between December 3-17), most of which are spinal/paraspinal infections.

If you or a loved one have suffered losses in this case, please click the link below and your complaint will be sent to a drugs & medical lawyer who may evaluate your Rare Meningitis Outbreak claim at no cost or obligation.
Request Legal Help Now

Posted by
Becky
on January 29, 2013
Tim, did you get injections in your lumbar spinal are? If that is what you are waiting for please don't. You will be in worse shape then you are now..There is a disease called Arachnoiditis, that some of these patients are getting. It is bad stuff. I know this b/c in 2005 I was given a series of 3 Epidural Injections and now I have this horrible disease..Please be careful and know all of your risks associated with these injections..
Becky