Rosemary Miranda's father was a railroad worker and he died of carcinoma of the lung. She is trying to reconstruct his life and death through official documents, brief memories and family stories. The statue of limitations has long run out on the 1961 death but Rosemary is still hoping for some form of compensation. 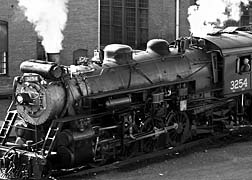 "I was in an orphanage in Pittsburgh when I saw him for the last time," recalls Rosemary. "He was sitting on a bench, he had on his white work shirt and some slacks. I said 'Daddy, may I please go home, I want to leave here'. He answered one word: 'No'. He didn't take me on his lap, say I love you, didn't hug me. I don't know if he knew he was dying or what was going on in his head but he didn't show any emotion. Out of his shirt pocket he pulled a bottle of medicine and drank it down like it was a Coke, he just gulped it. Could be he was in pain, maybe it was morphine. Then he coughed up blood in front of me. The other few times I saw him he seemed sickly to me.

He was a brakeman and an engineer for the Monongahela Connecting Railway in Mount Washington, PA, where he was employed right after the war from 1946 to 1961. His lungs were fine when he got out so I don't believe he got the cancer in the war. The VA checked and his lungs were clear. At work, he was around asbestos every day, breathing those fumes a lot.

I went to the Workman's Retirement Board trying to find out how much he made and the hours he worked just because I never knew anything of this as a child and they showed me his work earnings records. The Veterans Department gave me his medical records and the death certificate. I hadn't known it before but the records said he had had a lung removed. It must have been removed in January 1961, right before he died, because when I went through his records I didn't see much of a lapse between when he came off surgery and when he went back to work.

He died on February 14 and was buried on my birthday, Feb 18, 1961. I left the orphanage to go the funeral, I viewed the body and was driven back to the orphanage that day. I was 11.

I found out he had mesothelioma from the death certificate. The cause of death was marked as 'recurring carcinoma of the lung', perhaps it spread to the other lung, I don't know. The certificate also listed pulmonary thrombosis; he'd had a blood clot that broke off from the leg and went to the lung.

The job should have said to him: 'you go on disability or we're going to put you in another department to protect your remaining lung'. But they didn't do that in those days.

I'm almost certain he got lung cancer from handling asbestos directly in the railyard but I need to research how that happened. In those days the brakemen pulled on the brake, which was a long stick to stop the train, but I don't know if they wore gloves. I'm not sure how things work there; I've never been in one. I would like to find out if they stored the asbestos there, or made it there.

I didn't have much contact with the rest of my family but this one aunt, my godmother, said 'I tried to get your father to go on disability but he decided to go back to work instead'. It's devastating because he was 54 and dying and maybe he didn't have time to have a house and take my 2 sisters, myself and my brother out of the orphanage.

Doing my research, I've met with this speaker of the house in Harrisburg and spoke a long time to his chief of staff; I'm supposed to send them some information about my dad and the railroad. "

More RAILROAD WORKER INJURIES News
Monongahela Railway Company merged with Consolidated Rail Corporation (Conrail) in 1993. According to a 10-K SEC report filed by Conrail in March 1995, the company was named in 391 suits for personal injury or death due to asbestos exposure. The numbers or occurrences are nothing new, unfortunately. Within the industry, as early as the 1930s, railroad doctors confirmed that asbestos dust could cause the permanent lung disease asbestosis; by the 1950s they listed it as a cause of cancer, and by 70s the deadly terminal cancer mesothelioma was showing up in railway workers. It normally takes 10 to 40 years for the fatal cancer to manifest itself.

Although Rosemary has been told that the statute of limitations on her father's case is past, she continues to research and piece together her father's life and times on the railroad. She is hoping to connect with people who knew of the work conditions on the railroad in Monongahela in 1950s and '60s. "Maybe," she says, "people will contact me and say, 'I knew your dad when I worked in Pittsburgh'."