In their lawsuit, the eight men alleged that improper ballast in the CSX railyard caused them to develop serious injuries to their lower bodies, which have seriously impeded their ability to work. Ballast is the name given to the small rocks that are placed around train tracks in order to provide support and hold them in place. Most stretches of track are supported by mainline ballast, which uses larger rocks. 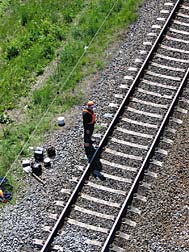 Because regularly walking on mainline ballast can increase a railroad worker's risk of slips, falls or injuries to the lower body, industry standards demand that the railroad companies place smaller rocks, called walking ballast, in their railyards to safeguard the health of their workers.

The eight workers who filed the railroad injury lawsuit alleged that CSX failed to place walking ballast in their railyard, despite company regulations which require them to do so. In addition, the employees alleged that they were required to throw improperly designed switches and to jump off of moving vehicles, both of which contributed to their injuries.

Their lawsuit said that CSX could have taken a number of steps which could have lessened or completely prevented the severity of their injuries. In addition to using walking ballast in the railyard, they stated that the company failed to conduct an ergonomic analysis of their job duties, which would have revealed the increased risk of injury.

They also claimed that CSX failed to prohibit employees from jumping off of moving trains until 1990 or from redesigning their switches so that employees didn't have to crouch to throw them. Quicker action in either area could have helped to prevent railroad worker injuries.

More News
All of the eight men developed osteoarthritis of the knees and many will probably be forced to shorten their railroad careers due to injuries. In addition, one of the workers has had surgery on both knees and will eventually require knee replacement surgery in both knees as a result of his injuries. Another one of the men has been left permanently disabled by the damage inflicted on his body from his railroad work.

Railroad workers are protected under the Federal Employees Liability Act (FELA), which allows them to recover damages from the railroad companies after suffering an injury in the workplace due to negligence. In addition to railroad ballast injuries or other types of chronic injuries, FELA also protects railroad workers in the event of a train accident, chemical or toxic exposure and other sources of injury.

If you or a loved one has been injured or had your health affected while working for a railroad, please contact a lawyer involved in a possible [Railroad Workers Lawsuit] who will review your case at no cost or obligation.
Request Legal Help Now

Posted by
roger byrnes
on March 9, 2017
hi there I have worked in the railway industry for nearly 20 years as a train cleaner in the railway yard for all these years I was walking on uneven ballast for that amount of time waling on it for approximately 5 hours to six hours every night I am having trouble with joints in my knees and ankles quite painfull sometimes from walking in that yard with the uneven railway ballast I live in great Britain uk and do u think I should contact a lawyer and do u think they would take my case on for compensation from the company please can anyone know what is the best thing for me to do thank you roger byrnes