Last month the New York Attorney General settled for $20 million against Sodexo, which began in 2006 when two whistleblowers filed a qui tam lawsuit under the False Claims Act against the multi-billion dollar company for ripping off school lunch programs and other government food services. 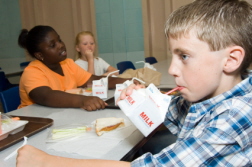 The two whistleblowers, brothers John and Jay Carciero, were former managers of Sodexo. John Carciero was fired after he blew the whistle on the company's unlawful retention of rebates, known as off-invoice rebates.

New York law prohibits food vendors from retaining these kinds of rebates because vendors would otherwise have an incentive to steer their clients to purchase products from companies with the largest off-invoice rebates rather than those with the best products at the lowest prices.

A short time later, Jay Carciero faced illegal retaliation, demotion, and finally termination for the same reason. Yet the brothers continued with their claims that Sodexo had defrauded New York government programs by pressuring food and beverage vendors to kick back huge rebates, and then secretly pocketing the savings rather than passing them on to government clients as required by their contracts.

More QUI TAM WHISTLEBLOWER News
After four long years, the brothers' efforts paid off in July 2010. If the government recovers any funds as a result of a qui tam lawsuit, whistleblowers are entitled to a reward, generally anywhere from 15 to 20 percent. And the brothers have likely saved taxpayers millions of dollars: Sodexo operates school cafeterias and accepts rebates from vendors in other states. "We hope that other governments will look to what New York has done for its citizens and make sure that Sodexo and other food vendors pass along savings to those who are paying the bills," said attorney Colette G. Matzzie, according to PR NewsWire. "The New York Attorney General's office is truly to be commended for its work. Its efforts will save New York taxpayers money for years to come."

And the Carciero brothers are to be commended—it must have been a difficult four years. "My brother, Jay, and I were angry when we learned that Sodexo, a multi-billion dollar company, was ripping off school lunch programs and other government food services," said John Carciero. "The millions of dollars from the rebates should have gone back to schools and other government clients. Sodexo betrayed the trust of the clients it was supposed to serve and hurt taxpayers at the same time." Sadly, Jay is now deceased.

Sodexo claims to be the leading provider of integrated food and facilities management services in the US, Canada, and Mexico and its clients included hospitals, universities, schools and nursing homes.