David Pardo is a pilot, a former Federal Aviation Administration (FAA) attorney, and is now a whistleblower. The life of a whistleblower is difficult, even horrifying at times," says Pardo. "I've lost friends because I had to blow the whistle on the FAA, and now the quest for investigation and to clear my name has become my life mission." 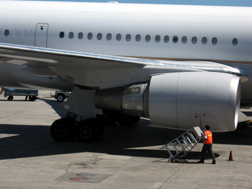 "I don't want to be maudlin or dramatic, but being in this situation has been psychologically harmful, and I probably exhibited symptoms of PTSD, which is pretty typical for a whistleblower," he adds. Although blowing the whistle has been traumatic, Pardo also says he was lucky that he could put a stop to the retaliation early on because of his background as a lawyer. Some whistleblowers suffer many years of retaliation—often alone and poverty stricken—before justice is served…

Pardo was hired by the FAA in late 2009 and soon found himself in what he considered an unhealthy environment. "After six months on the job, I was asked to draft and sign off on the FAA's official legal view of a longstanding interpretation regarding how long dispatchers and mechanics may work before they get time off," Pardo says.

The current FAA rules require that a dispatcher/mechanic can work six days in a 7-day period, provided he gets 24 hours off. However, there is a qualifier: 'or the equivalent thereof in a calendar month.' So the FAA has interpreted this to mean that whoever is employing these people can force them to work up to 24 days in a row, provided they get a block of four days off, in each calendar month. Pardo thinks this schedule is "insane," but his opinion regarding pilot, mechanic and dispatcher fatigue didn't cause him to blow the whistle. "My objections were legal and procedural," he says.

"The Colgan plane crash started everything," Pardo explains. "A supervisor was in charge of the legal aspects of fatigue-related reforms, which were going to be comprehensive: We already have the reforms for pilots, and my direct supervisor and I were in charge of reforms for mechanics and dispatchers. There was direction to change the long-standing interpretation related to these reforms without involving the public as required under the law.

"That's what started my whistle-blowing action—when I realized I was being asked to sign off on an unlawful legal interpretation. I objected because the DC Circuit says that, when an agency decides to reverse a long-standing interpretation, it needs to involve the public via Notice-and-Comment procedures.

"In other words, this is a public, democratic process. Once I raised concerns internally regarding the refusal to adhere to regulatory procedures, the FAA engaged in a retaliation campaign against me. Firstly, the day after I sent an e-mail stating the law required certain things and I wouldn't sign off on it, my boss agreed with me; she presumed the FAA would proceed with Notice-and-Comment.

"Secondly, that same day, there was a hostile and intimidating conversation in my office with my direct supervisor, who objected to my e-mail. Thirdly, three weeks later, the FAA issued an identical letter without Notice-and-Comment. One month after that, I received a low-performance evaluation. I objected with the evaluation, took it up the chain of command and filed a complaint for reprisal with the US office of Special Counsel.

"After that, there was infighting in the office, the FAA did not respond to my complaint and I was assigned to a different branch. On September 1st, realizing that the external government agencies were not responding to my allegations, I e-mailed the Secretary of Transportation and his general counsel. I notified them of the situation and requested a fair and just investigation into my allegations. Five days after that I created my blog."

On September 20, 2010, David Pardo was terminated from the FAA and given a permanent restraining order not to step foot in any Department of Transportation (DOT) HQs, buildings or facilities.

"I think this is standard operating procedure for whistleblowers," says Pardo, who is now a member of the FAA Whistleblowers Alliance, composed of current and former employees who have blown the whistle and/or suffered reprisal. "Ever since I was fired I have tried to get to the truth. I would like to know why the FAA did not take these fatigue reforms seriously and why does the administration continue to allow retaliatory conditions to persist at the FAA?

More QUI TAM WHISTLEBLOWER News
"This is how the FAA violated the law," says Pardo. "The proposed pilot rule is open for comment and everyone can offer their views—it closes November 15th. This proposal changes how long they fly in a given day, how much rest they get, etc. Right now there are problems with the proposed rule and it seems that all the comments are from pilots, and they don't like lengthening their flight time. It is counter-productive and adds fatigue to a pilot. This is the benefit of Notice-and-Comment. I worked on fatigue issues for dispatchers and my direct supervisor had the same assignment for mechanics. I think government regulations for both are identical but the FAA views of these have been in place since 1942.

"I told my boss that if we do this, we will create uncertainty in the public, open ourselves to liability and possibly cost taxpayers a whole lot of money because it would invite a lawsuit and the public has something valuable to contribute.

"There is no debate about the Notice-of-Comment necessity—even my boss conceded it is necessary. He even said this interpretation is unreasonable but that's the way it is. This may seem like a small thing but if lawyers cannot follow the law, then we are susceptible to improper influence."

Posted by
Rose Colombo
on November 12, 2010
It doesn't matter if the legal issue seems small because any violation of the law is not small. It is the one small violation that leads to more violations of the law until some thing happens that injures or kills innocent people or causes them some sort of a loss. Instead of commending lawyers or citizens who fight back for justice as many might believe is the norm, it usually is not and whistleblowers usually end up being harassed and some times even threatened and worse. After expericing many injustices, I complete my book, "Fight Back Legal Abuse" which is now available on Amazon.com and BN.com or can be accessed on my website at fightbacklegalabuse.com.