Of the 18 healthcare lawsuits filed under the whistleblower qui tam provision of the False Claims Act and unsealed last November, 13 of the whistleblowers (relators) are current or former employees of the defendant. 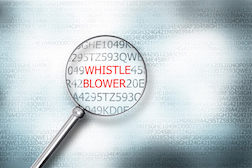 Four of those 18 qui tam lawsuits involved kickback allegations, according to The National Law Review , and one lawsuit that claimed a healthcare agency paid kickbacks in return for referring Medicaid patients to the agency actually settled with the relator who is also the co-conspirator.

Best Choice Home Health Care Agency Inc. in Kansas City and its owner, Reginald B. King will pay $1.8 million to settle the lawsuit that was filed by Christopher Thomas. Thomas worked at Best Choice before starting Vision Group Transport Service, a company that transported patients from their homes to health care facilities.

From about July 2010 to January 2013, King offered to pay Thomas to refer clients to Best Choice. (Thomas filed the whistleblower suit in 2013 but it was under seal until late last year.) King would pay $50 to individuals for each client referred to Best Choice in addition to the service hour payments and King had signs placed in the Best Choice office advertising the $50 referral payment. The alleged kickback arrangement directly compensated Thomas for each hour of service that Best Choice billed Medicaid.

And Thomas racked up the hours. According to the Justice Department, King paid Thomas and Vision Group $58,000. Thomas also blew the whistle on other employees of Best Choice, alleging they padded the number of hours they worked for clients.

More QUI TAM WHISTLEBLOWER News
Best Choice employees would falsify timesheets to inflate the number of transitional living specialist (TLS) hours they performed. And client signatures were routinely forged. For instance, one “employee” logged up to 80 hours per week working as a TLS when in fact he had a full-time job at Time Warner Cable. And another employee charged TLS services to Medicaid for a client who was incarcerated or homeless at the time, reported KCUR,the flagship NPR station in Kansas City.

Thomas collects $43,178, or 10 percent of the federal share of the settlement, minus the amount of kickbacks. And he doesn’t go to jail. Qui tam whistleblowers typically receive anywhere from 15 to 30 percent of the total recovery in a case but that share is reduced if the whistleblower was involved in the fraud. And Best Choice Home Health Care Agency Inc. is still in business.