"My obstetrician said that I should stay on Prozac throughout my pregnancy," says Melissa Christensen. "I wish he knew in 2002 what I know today - that Prozac is toxic to the fetus in the last three months." 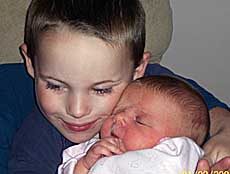 "My family doctor prescribed Prozac about 18 months before my son Cody was born. As soon as I knew I was pregnant, I stopped taking it. But I was only off the drug for a few days. After seeing my obstetrician, he told me to stay on Prozac. I was about five months pregnant when I called the pharmacy for a refill. My family doctor called me back (something she had never done before) and told me that she would not give the OK for a refill, and if I insisted on taking Prozac, my OB would have to prescribe it as I was under his care now.

Which is exactly what he did. That was in August, 2002. I went into pre-term labor several times before I finally had to have a C-section. I started getting sick and losing weight, even though this was the time I was supposed to gain weight. But my baby was gaining weight - fast. I had flu-like symptoms and knew something was wrong but my OB said it was just because the baby was getting so big and I was just feeling uncomfortable.

On December 6th, I went to the hospital with labor pains but they told me that I was dehydrated; they made me drink lots of juice and I had an ultrasound. A few hours later I went home. By January 4th, he was so big that I had to have a C-section. As soon as Cody was born he was put into ICU, where he stayed for five days. He had an IV and an oxygen hood and his own nurse. At one day old, Cody had an x-ray of his lungs. He had trouble breathing then he developed jaundice and his sugar levels were plummeting.

Cody is now three years old and he has severe asthma. When I was looking over his records, the chest x-ray showed hyper-inflation of his lungs and through my research I found out that this is one of the symptoms of PPHN. Furthermore, the x-ray is how PPHN is diagnosed. I only found out about PPHN one month ago: one of my friends gave me a book about parenting a child with special needs. I read that one of the causes could be drugs taken during pregnancy. Then I went on the Internet and found out how prevalent the correlation is between birth defects and Prozac.

I'm mad about this. And I also nursed my son. My OB doubled my dose right after Cody was born -I was taking 40 mg per day. As soon as I read the book I quit taking Prozac and made an appointment with my family doctor. She prescribed another antidepressant that is considered safer.

I know that a lot of people are trying to find out more about this birth defect issue. But you don't know right away; it could happen months after they are born. I do know this: all of Cody's problems are consistent with mothers on Prozac. When I asked my OB if Prozac was safe to take during pregnancy, he said, 'We give Prozac to children'. Obviously, I trusted him.

Now it is proven that Prozac is toxic to the fetus and causes pre-term labor. I believe it was because of Prozac that caused Cody to be born prematurely.

More News
As well, he was born with all the symptoms of a child with prenatal Prozac exposure - withdrawal from Prozac. These symptoms are jitteriness, lack of sensitivity to pain, low oxygen levels, respiratory distress, low blood sugar, and weak muscle tone. Research has proven that this happens to babies at birth but that they get over it within four days. In our case it seems like Cody never 'got over it'.

Cody has a wide range of problems, none of which have any other explanation, but the drug companies have not studied the long term effects of prenatal Prozac exposure. I don't think people know enough about the side affects of this drug and Prozac will continue to be prescribed to pregnant women if we don't do something about it. Because the drug company isn't telling them to stop taking Prozac."

If your child was born with a birth defect, and you took Prozac while pregnant, please contact a [Prozac] lawyer who will evaluate your claim at no charge, and may be able to help you.
Request Legal Help Now

Posted by
Andrea
on October 26, 2015
I was taking 40mg of fluoxetine hydrochloride and I stopped when I decided to have a baby. I went to the gynecologist to have my IUD removed, and she talked me into taking it again but recommended I stop near the end of my pregnancy. I took it for one additional week after that appointment before I decided to stop until I completed my own personal research and decide for myself based off of the fruits of that research.

The research I've done backs up what you're saying and has categorically shown me that you shouldn't take antidepressants while pregnant. I'm glad I found this article... Thank you for posting it. It's desperately needed so we can know what happened to others and protect ourselves accordingly.

Posted by
Nadine
on March 17, 2014
Last year I saw a VERY pregnant woman picking up Prozac at Kaiser. I tried to talk to her about recent lawsuits and she told me to piss off. I contacted Kaiser about this and they also told me to piss off. The scary thing is that as a Kaiser member, when you start your membership, you sign a waiver that prohibits you from suing. If you are a Kaiser member, please beware of their tricks! Do NOT take Prozac while you are pregnant. They really don't give a sh*t and they are protected from any legal action. It's a huge problem but that's what happens when companies have so much power!