Concern is mounting that the use of antidepressants such as Prozac by expectant mothers can increase the risk of persistent pulmonary hypertension (PPHN) for the infant. While the disorder is rare, the Medicines and Healthcare products Regulatory Agency (MHRA) in the UK is advising doctors to carefully monitor expectant mothers who take drugs such as Prozac or Seroxat for depression. 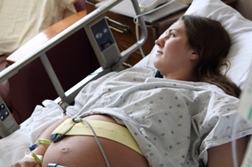 Babies born with PPHN have trouble breathing outside the womb after they are born.

According to the 5/16/10 issue of the Daily Mail in the UK, PPHN affects about two babies in every 1,000 births. In concert with antidepressants such as Prozac, that ratio goes up to five births in every 1,000. New research carried out by the European Medicines Agency's Pharmacovigilance Working Party confirmed the link to PPHN and SSRI use.

In the MHRA's latest drug safety communiqué to health care professionals, the agency noted that "a review of data has suggested that the use of SSRIs in pregnancy, particularly in the later stages, may increase the risk of persistent pulmonary hypertension in the newborn."

An insert inside all packaging related to SSRI antidepressants spells out the concern for both the expectant mother and her doctor.

More PPHN AND PROZAC News
Studies revealing a potential link between SSRI use and birth defects emerged about five years ago. At the time the MHRA advised doctors against prescribing SSRI antidepressants unless absolutely necessary. However, according to the Daily Mail, it was revealed in 2009 that general practitioners (GPs) were still prescribing SSRI drugs to women who were considering becoming pregnant.

However, a baby born with PPHN triggered from SSRI antidepressant use by the mother can face a life-threatening situation outside the womb.
READ ABOUT PPHN AND PROZAC LAWSUITS

If you have suffered losses in this case, please send your complaint to a lawyer who will review your possible [PPHN and Prozac Lawsuit] at no cost or obligation.
Request Legal Help Now