More PROTON PUMP INHIBITOR News
According to a recent release from the US Food and Drug Administration (FDA), long-term proton pump inhibitor use can lead to low serum magnesium levels, which can cause adverse events such as seizures. 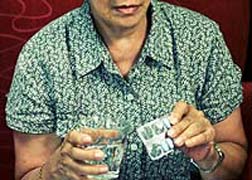 In addition, the federal agency said that in approximately one quarter of the cases examined, supplementation of magnesium did not improve the levels of serum magnesium, meaning the patients needed to stop using the proton pump inhibitors.

The inhibitors are used in the treatment of conditions such as gastroesophageal reflux disease, ulcers and inflammation of the esophagus, according to the FDA. They work by lowering the amount of acid in the stomach.

According to the National Library of Medicine, gastroesophageal reflux disease "happens when a muscle at the end of [one's] esophagus does not close properly."

Posted by
Linda Sinclaie
on August 26, 2016
I've taken nexium since 2001 with bad side effects like weight loss. Chronic dirrea ,muscle spams , serve headache aches , stomach pain , chest pains and more, I can't get off of ppi bc of so much acid