Tema has been taking proton pump inhibitors (known as PPIs), both prescription and over-the-counter heartburn medications, for 22 years. "I still have acid reflux problems so what's the point of taking PPIs?" says Tema. "That's a lot of money I've wasted, but I can't stop taking them, and now I'm really concerned about the increased risk of PPI fractures." 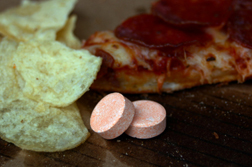 There is also talk within the medical community that PPIs are unnecessary and over-prescribed. According to Dr. Marcus Thygeson, president of the Center for Healthcare Innovation at Allina Hospitals & Clinics in Minneapolis, Minnesota, millions of people currently taking them probably don't need them. Further, even though they are supposed to be used only for the short-term, Thygeson said that
"Once you start a patient on a PPI, you're putting him or her on it for a lifetime."

Why can't someone just take a PPI short-term? Because doctors are reluctant to stop a medication if it's working. "One of the first rules in medicine is, don't poke a skunk," said Dr. David Peura, an industry consultant and former president of the American Gastroenterological Association. "That's why I think a lot of people are probably on the medicine who probably don't need it."

More PROTON PUMP INHIBITOR News
And it's harder to stop taking the med when insurance is willing to pay for it. "Even though my insurance covers most of the cost, I still have to co-pay for these proton pump inhibitors," says Tema, adding that she wouldn't be able to afford her meds if not for her insurance footing most of the bill.

"I'm a cheap restaurant date," Tema says, laughing. I can't eat a normal meal and I can't drink any alcohol—if I try to have a glass of wine it feels like someone lit a match and threw it down my throat. I have to cut my food into little pieces and can only eat small amounts at a time; I have to eat six times a day.

"No matter what make of PPIs I've tried, nothing works well and I can't eat anything at night; I have to sleep elevated or food just comes back up. I'm looking for another answer because these PPIs aren't doing anything for me. Now I am looking for a lawyer because I can't lead a normal life, and I'm also concerned about these PPI side effects; I'm 59 years old and a hip or femur fracture would do me in."