Brad Dovell is a resident of Calgary, Alberta who could have gone the Propecia finasteride route for his hair loss. Instead, according to the Calgary Herald (11/11/16) he chose a surgical procedure called ARTAS Robotic, which transplants hair from the back of the scalp and moves it forward to help ‘fill’ sparse areas towards the front. Dr. John Gillespie, of the Gillespie Clinic in Calgary, also noted Propecia help as an option: finasteride that blocks the male hormone dihydrotestosterone, thought to be a precursor to hair loss. 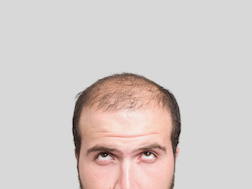 And while Gillespie noted that Propecia side effects can cause birth defects in pregnant women, Propecia finasteride is “very effective for men with vertex (top of the head) hair loss. It will stabilize frontal hair in most men,” Gillespie said.

There was no mention in the report of the potential for Propecia sexual dysfunction.

According to the Post-Finasteride Syndrome Foundation (PFS Foundation), a not-for-profit foundation dedicated to raising funds for clinical research, the database of adverse drug reactions maintained by the World Health Organization’s Programme for International Drug Monitoring contained 13,546 adverse reaction reports associated with finasteride use as of September 26. The numbers included 3,577 sexual function and fertility disorders, 1,526 depressed mood disorders and disturbances, and 67 completed suicides.

Various plaintiffs have alleged that Propecia sexual dysfunction has been, for them, a byproduct of Propecia use for hair restoration. Many plaintiffs assert that Propecia impotence continues long after finasteride treatment has stopped.

Now, there is new research that suggests Propecia side effects can be worse in men with underlying neurobiological abnormalities.

Characteristics of Men Who Report Persistent Sexual Symptoms after Finasteride Use for Hair Loss, is a study conducted at Brigham and Women’s Hospital in Boston by a team of 19 clinical researchers led by Shalender Bhasin MD, a professor of medicine at Harvard Medical School. The study found that neural circuitry overlaps with functional abnormalities in men suffering from “major depression.”

“This research has several firsts, including use of the latest functional MRI imaging to identify areas of the brain effected by PFS,” said Dr. John Santmann, CEO of the PFS Foundation, which funded the study along with Harvard Clinical Translational Research Institute and the Center for Clinical Investigation at the Brigham and Women’s Hospital.

The study was published in The Journal of Clinical Endocrinology & Metabolism.

Posted by
Christian Kempton
on December 18, 2016
I took Finesteride for 15 years. 1 would break a pill into quarters and take daily. I was wondering why I have sexual disfuncions at times?