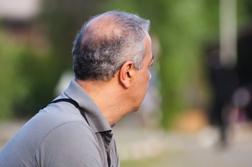 The latest Propecia lawsuit was reportedly filed by a man under the name "John Doe" because of the nature of his injuries. The plaintiff's desire to remain anonymous underscores the embarrassment some men feel about Propecia side effects, which reportedly include a risk of erectile dysfunction, decreased libido, decreased semen output and depression. This embarrassment may mean that many more men are suffering from similar side effects but unwilling to see their doctor about the issue.

More than one lawsuit has been filed against Merck, however, indicating that plaintiff "John Doe" is not alone in suffering such side effects. Furthermore, some studies indicate that more men than previously thought could be suffering from the same side effects, and that those side effects could last longer than patients were warned about, resulting in allegations that Merck downplayed the risks associated with the hair loss medication.

According to some reports, warning labels in Europe indicate that sexual side effects linked to Propecia could be permanent, although the warning labels in the US did not make such a statement. Meanwhile, a study published in the Journal of Sexual Medicine in March 2011, found that drugs in the same class as Propecia, a class called 5-alpha-reductase inhibitors, are linked to a variety of sexual side effects. They may also be linked to an increased risk of the development of breast tissue, a condition known as gynecomastia.

More PROPECIA News
In a different study also published in the March 2011 issue of the Journal of Sexual Medicine, researchers reportedly found that men who developed side effects suffered those effects on average for 40 months after discontinuing medication.

In June 2011, the US Food and Drug Administration (FDA) issued a warning that Propecia could be linked to an increased risk of high-grade prostate cancer. That warning was based on a study that did not involve Propecia but did involve drugs with a higher dose of the same active ingredient (finasteride) as is found in Propecia.

Lawsuits have now been filed against Merck, maker of Propecia, alleging the company downplayed the risks associated with Propecia and failed to warn patients about the severity of sexual side effects.

Posted by
Richards
on November 1, 2014
Such type of risks are associated with many products. Health suppliments. People should be cautious while using these products.